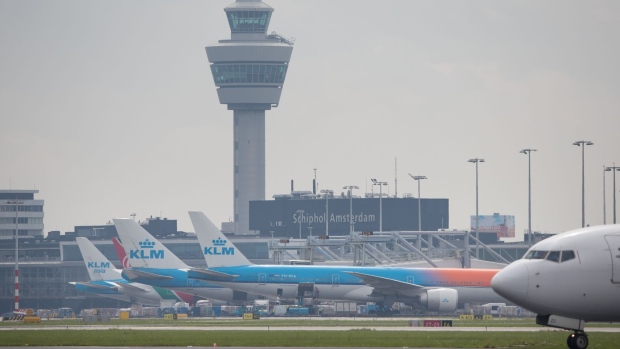 (Bloomberg) -- Amsterdam’s Schiphol Airport is further limiting passenger numbers until the end of March as it continues to struggle with staff shortages.

The Dutch arm of Air France-KLM said the newly announced caps will mean a reduction of as much as 22% for the winter season and the period up until March. The airport operator had already reduced the maximum number of local departing passengers by an average of 9,250 passengers, or 18% per day, in a cap that applies until at least Oct. 31.

KLM said it is currently facing damages of more than 100 million euros ($98 million) linked to the capacity caps. “This harms KLM and stands in stark contrast to the increase in the cost of using Schiphol, rising to 37% in the coming years,” the airline said in a statement.

“KLM has said before that limiting the number of passengers cannot be a long-term measure, but that is what it seems like now,” said the airline’s Chief Executive Officer Marjan Rintel. “With the new winter restrictions, Schiphol offers us no prospects whatsoever.”

The airport may be able to consider at the end of 2022 whether it can allow more passengers from the end of January, Schiphol said in a Thursday statement.

The extended capacity caps are a “necessary” measure, said Schiphol’s Chief Operator Officer Hanne Buis, adding that the airport needs to be “realistic” about the challenge of making structural improvements in a tight labor market.

Earlier this month, Schiphol’s Chief Executive Officer Dick Benschop resigned from his role. Benchop said he didn’t want the attention on his leadership to “become an obstacle for Schiphol.”