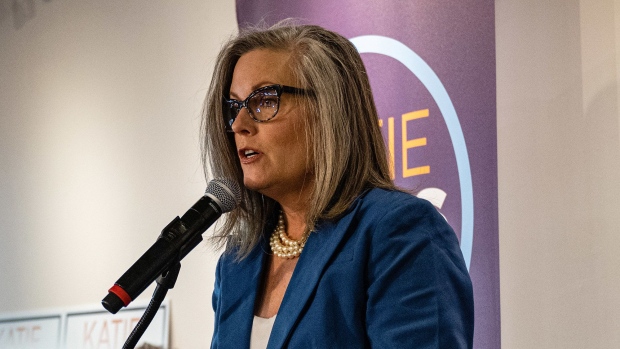 (Bloomberg) -- A rural Arizona county’s refusal to certify the results of the November election could cost Republicans a seat in the US House of Representatives, where they hold a narrow seven-seat majority.

Secretary of State Katie Hobbs, also the governor-elect, has gone to state court to force Cochise County to certify the election after its Republican-led Board of Supervisors failed to meet a Nov. 28 deadline while making debunked claims about the state’s voting machines.

In court papers, Hobbs’ office said that if the county refuses to certify by Dec. 8, the ballots of more than 47,000 county residents will not be included in the final tally.

That would flip the results of the race for Arizona’s Sixth Congressional District, where Republican Juan Ciscomani holds a 5,232-vote lead over Democrat Kirsten Engel in unofficial results, as well as the race for state Superintendent of Public Instruction, where the Republican candidate has a narrow lead.

“The Board’s inaction not only violates the plain language of the statute, but also undermines a basic tenet of free and fair elections in this state: ensuring that every Arizonan’s voice is heard,” the lawsuit reads.

Arizona has been a hotbed of election denial, with failed candidates for governor, senator, secretary of state and attorney general who all cast doubt on the legitimacy of the 2020 election. Failed gubernatorial candidate Kari Lake, who ran against Hobbs, has not conceded her loss, while Donald Trump has aired conspiracy theories about the state’s elections on social media.

The nonprofit Arizona Alliance for Retired Americans is also suing to try to force Cochise County to certify.

Elsewhere in Arizona, a county Board of Supervisors whose members had originally threatened to refuse to certify the results of the election ended up doing so just before the deadline. Though the Mohave County Board of Supervisors postponed the vote once, citing concerns about voting machines, it ultimately approved the results rather than risk being charged with a felony.