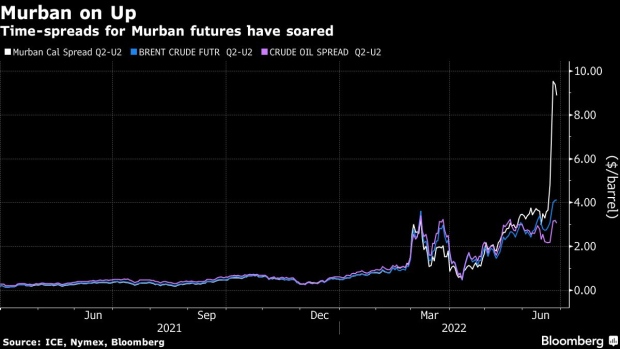 The oil market is so strong some gauges are at previously unthinkable levels.

Nowhere in the world is that as stark as in a flagship futures contract in the United Arab Emirates, currently the third-largest producer in the Organization of Petroleum Exporting Countries.

Murban crude oil futures for August are trading at about $8.90 a barrel higher than for the following month. The same spread closed at a record $9.52 on June 24. The jump is so eye-watering that the equivalent marker for global benchmark Brent has never traded at that level.

With oil refining margins at incredibly high levels globally, traders are willing to pay significantly more for get-it-now crudes. Shipments of Middle Eastern crude to Europe, including Murban, have grown in recent months. The flows have likely increased as refiners seek to replace Russian supplies, which have been shunned since it invaded Ukraine.

While the price spike has been enabled by an incredibly strong crude market -- both Brent and US benchmark West Texas Intermediate are back in a superbackwardation that characterizes extremely tight markets -- liquidity in the emergent Murban contract is more limited than for the main benchmarks.

Total open interest across all Murban futures is about 40,000 contracts and volume rarely surpasses 5,000 contracts a day, a fraction of that for Brent or WTI.

But the jump is a reminder of the strength in physical crude oil right now. Key North Sea swaps have also surged in recent days, in another sign of wider market strength.