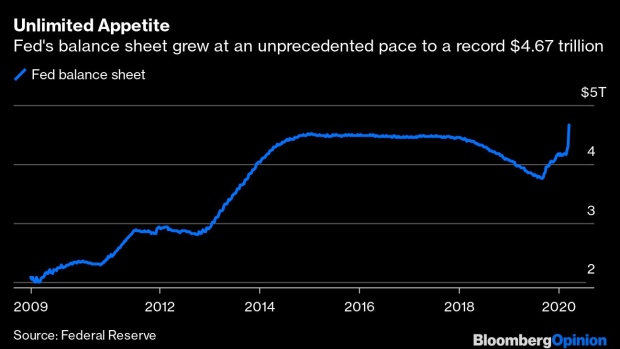 (Bloomberg Opinion) -- If there were ever a time for bond traders to be fearful of out-of-control U.S. deficits, it would have been Wednesday.

After all, the Trump administration and congressional leaders agreed overnight to an unprecedented $2 trillion stimulus package to help mitigate some of the economic damage caused by the coronavirus outbreak. No one is asking “how will we pay for it?” The answer is obvious: piling on to the $23.5 trillion national debt.

Barclays Plc strategists Anshul Pradhan and Andres Mok were among the first to put hard estimates to the expected surge in sales of U.S. Treasuries, and the figures are as staggering as expected. The Treasury Department will have a $2.6 trillion financing need in 2020, they wrote, and about half of that will likely be covered by short-term T-bills. The net issuance of longer-term notes and bonds will rise to $1.35 trillion this year, up from about $1 trillion in 2019, and it’ll grow to $1.8 trillion in 2021. As a reminder, the largest U.S. deficit in modern history was $1.4 trillion in fiscal 2009, which shrank for five of the next six years to as little as $442 billion by 2015. It’s hard to see this gap winnowing anytime soon.

And yet, the world’s biggest bond market rallied. Benchmark 10-year and 30-year yields fell by about four basis points, settling into what appear to be their new comfort zones of 0.8% and 1.35%, respectively. A month ago, those levels would have easily represented new record lows. Even five-year notes gained, despite Barclays forecasting that “the bulk of the increase” in new debt would be around that point. A $41 billion auction of the maturity on Wednesday was strong, with the yield lower than the market indicated before the sale. The S&P 500 Index is up, so the Treasury market’s advance could hardly be chalked up to a pure bid for haven assets.

So, what’s going on? Exactly what you’d expect when a price-insensitive buyer like the Federal Reserve pledges to buy as much as necessary for the Treasury market to function normally.

It’s starting to look as if that “whatever it takes” number is going to be almost as huge as the fiscal stimulus package. “Despite unprecedented U.S. Treasury purchases as part of the Fed’s new QE program, there is little to no risk that the central bank will run out of securities to purchase,” BMO Capital Markets’s Jon Hill wrote Wednesday.

BMO agrees with Barclays that much of the deficit spike will be financed with short-term debt. That’s important because the Fed’s policy bars it from owning more than 70% of any single Treasury — soon it will need new ones to buy. “These borrowing needs will eliminate any skepticism that the Fed will be able to source securities to complete their QE purchases as the federal government will always make more USTs,” Hill said.

For now, the Fed is adding about $25 billion a day in debt due within 27 months, according to Hill. At its current pace of buying $75 billon or more a day across maturities, the central bank would add a whopping $1.6 trillion to its balance sheet in a month. The previous record for a month was March 2011, at $120 billion.

Let those last two lines sink in for a moment. The Fed is on pace to buy Treasuries in an order of magnitude 13 times greater than any other time in its history.

I wrote earlier this week about the Fed’s “infinite cash” and how it will be put to the test like never before given the huge increase in debt over the past decade. This is precisely what I meant. The U.S. Treasury market has grown to $17 trillion from less than $5 trillion around this time in 2008. Yes, foreign investors bought bonds, as did Americans in search of safe income. But in times of distress, the central bank has shown it will gobble up much of what the Treasury sells to keep the world’s borrowing benchmarks in line. It’s going back to that tried and true method in a big way to offset any incoming pressure from the federal government’s stimulus bill.