Winners and losers in Q3 on the TSX

The best performing sector in Canada has lost its mojo.

After eight straight months in the green, tech stocks are now on pace for their first slump this year with about $8.3 billion in market value lost -- making them the biggest losers in September.

The rotation to value from growth sent stocks like Shopify Inc. on its longest losing streak on record. There was also BlackBerry Ltd.’s 30 per cent collapse this week after reporting a massive earnings miss and forecast cut. Shopify makes up a whopping 35 per cent of the S&P/TSX Information Technology Index, while BlackBerry has about a three per cent weighting. The slump in FAANG stocks after U.S. President Donald Trump’s negative remarks about the growing power of social media platforms seeped into investor sentiment for Canadian tech too. 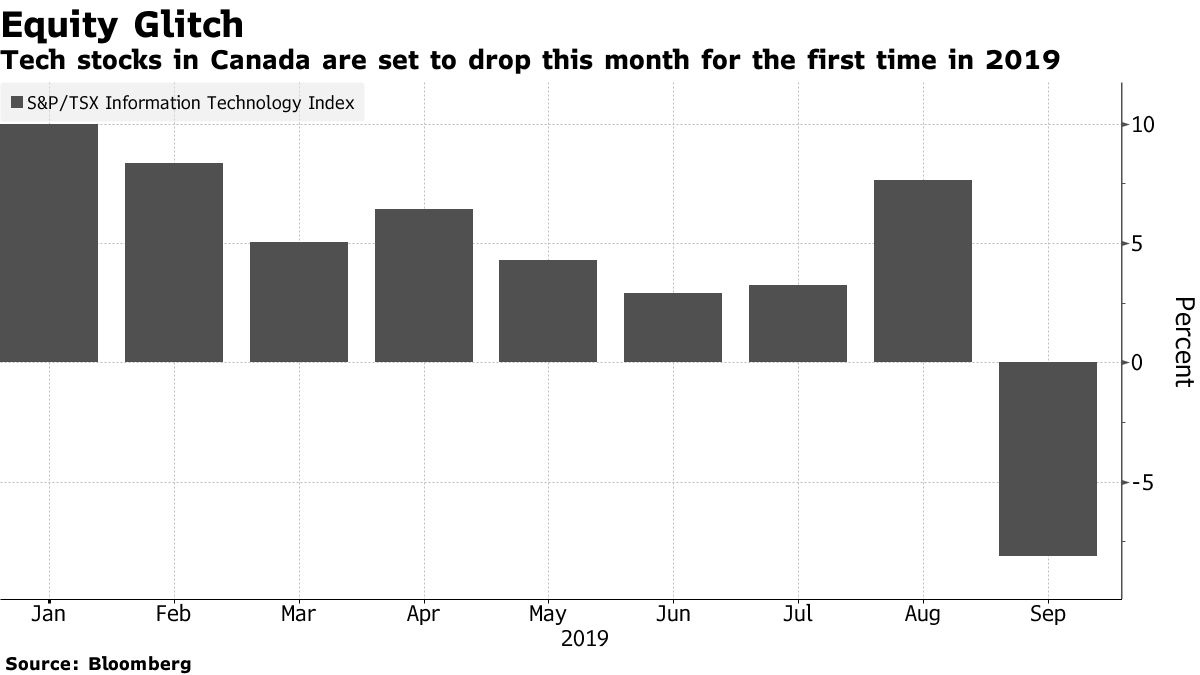 “The pace of this recent run in technology stocks, driven in large part by the success of Shopify, was unsustainable, and likely driven in part by short covering,” said Hans Albrecht, fund manager at Toronto-based Horizons ETFs Management Canada Inc. “When that dried up the bottom fell out.”

Was the epic 59 per cent rally into August too good to be true? Sky-high valuations have slipped with the selloff but are still well above the five-year average. Shopify, which has found profit elusive, carries a forward 12-month price-earnings ratio of about 466, according to data compiled by Bloomberg. 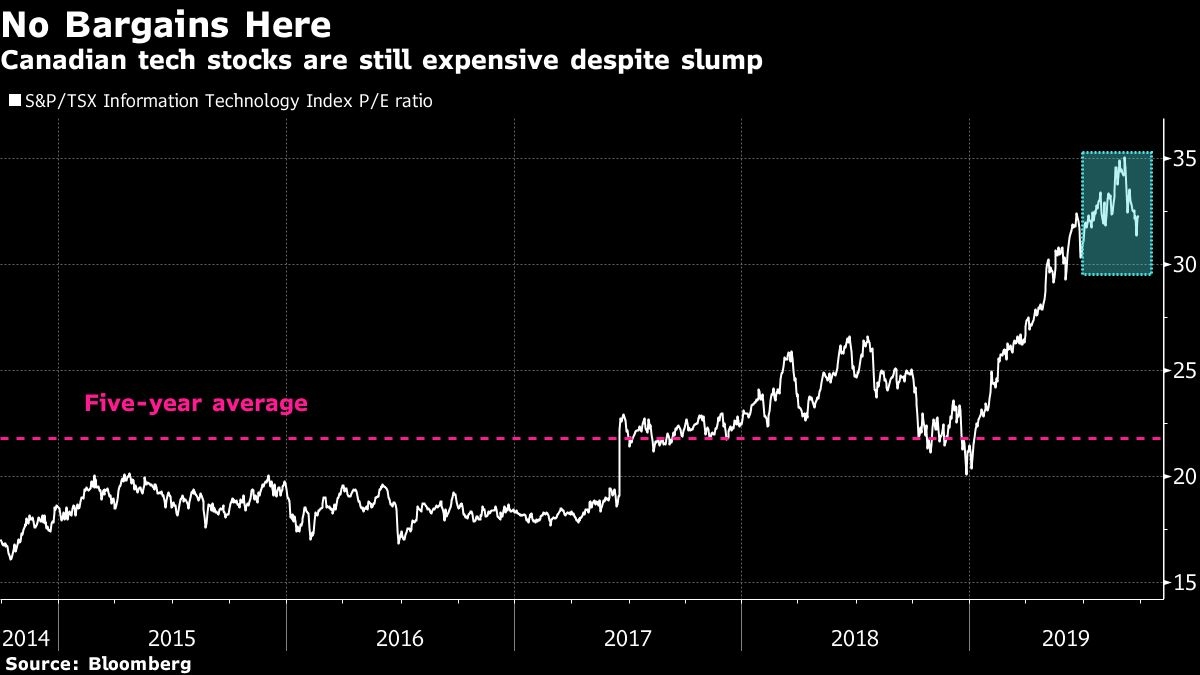 The slump may have also knocked Canadian pride down a peg or two. Shopify, along with Lightspeed POS Inc., whose shares have slumped about 35% since hitting a peak in August after pulling off one of the most successful initial public offerings in North America this year, have been held up as exhibit A and B that the country really can do tech.

“Is this the end of the run for tech? Absolutely not,” Albrecht said. Unlike the U.S., Canada has a handful of tech stocks that make up a small part of the broader S&P/TSX Composite Index, pushing valuations up at an accelerated pace. “This year’s run had valuations overextend and invariably investors realize that fundamentals need to catch up at least to some extent.” The tech rally could take a pause for now and push ahead in 2020, he added.

Despite the flight to value this month -- boosting heavyweights like financial and energy stocks -- this week paints a different picture -- stocks snapped their longest winning streak since April and have lost 0.6 per cent amid political turmoil in the U.S. and evidence of slower growth in Europe.

Here’s a look at what happened this week: 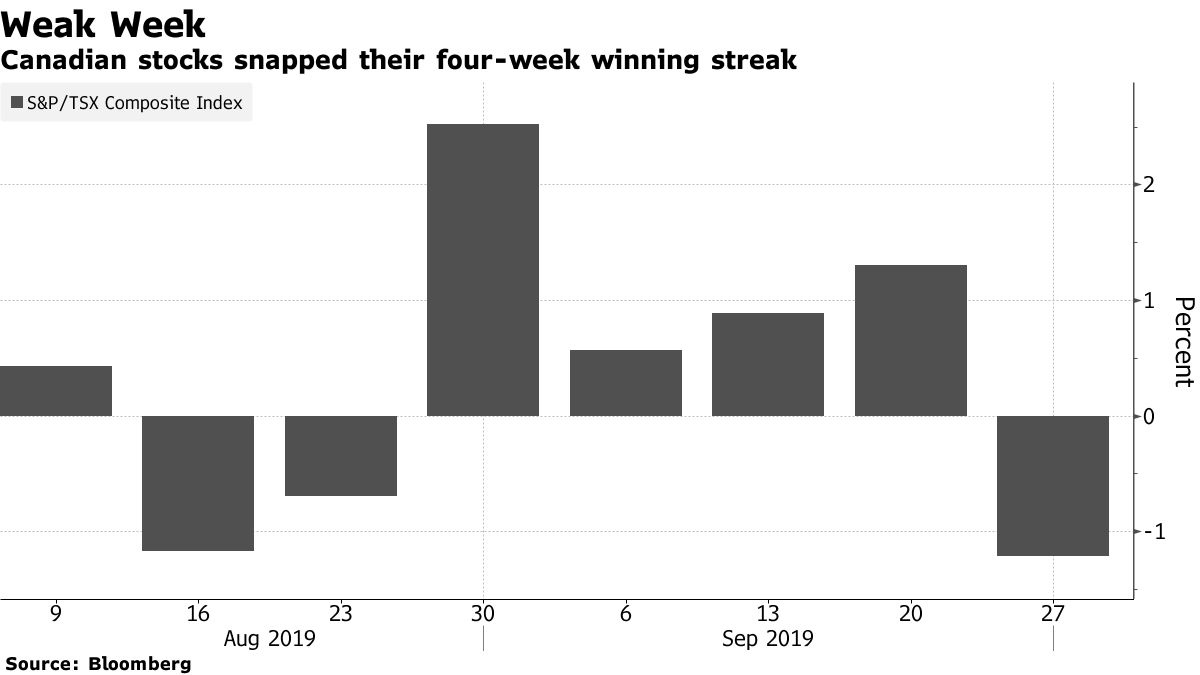 It was quiet on the data front with Canada’s July wholesale sales rising 1.7 per cent to $65.4 billion, surpassing expectations. The blockbuster figures that economists will be watching out for is July GDP data expected on Oct. 1. This comes ahead of Bank of Canada’s monetary policy decision on Oct. 30.

Tomorrow the global climate strike continues!! I’ll join the strike in Montreal.
170 countries and 6631 events so far. #weekforfuture
Find your closest strike or register your own at https://t.co/G06WbXNvl1 or local websites.
Spread the word!#FridaysForFuture #ClimateStrike pic.twitter.com/RZM0Whxufc

--With assistance from Yueqi Yang and Esteban Duarte.