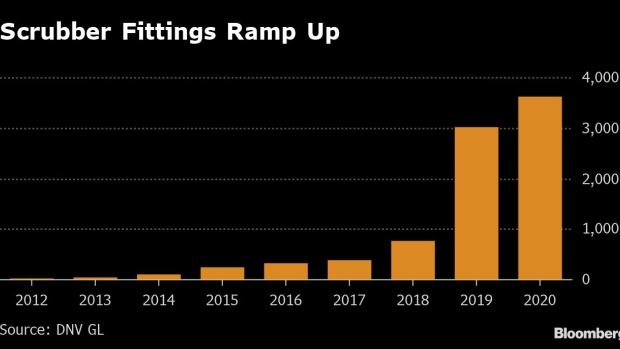 (Bloomberg) -- As recently as a year ago, the oil market was in a panic about changes to the kind of fuel that ships must burn.

A senior executive called the switch the biggest change to the oil industry ever. Traders were anticipating a bonanza. The shipping industry was warning about potential accidents. Volatility in air-fuel, trucking and other costs were being touted.

While some of those concerns linger, things have subsequently calmed down a little. This story looks at why and what’s likely to happen next.

The regulations from the UN’s International Maritime Organization, which start in January, require ships to burn fuel containing less sulfur. That makes life difficult for refineries because residual oil -- the stuff that vessels mostly use today -- often has high concentrations of the substance.

Part of the panic has been addressed by a shift in the type of crude that’s being pumped out of the ground globally. Much of it is now less dense and contains less sulfur, lowering the pressure on refineries to find a way to remove the pollutant blamed for causing acid rain and aggravating human health conditions like asthma.

Shale oil production has surged in the U.S., while supply of medium and heavy crudes containing more sulfur has ebbed due to sanctions on Iran, the collapse of Venezuela, and OPEC’s persisting output cuts. The end result -- say analysts at Wood Mackenzie Ltd., Facts Global Energy, Energy Aspects Ltd. and JBC Energy GmbH -- has been curbed supplies of the heavier, sulfurous ship fuel that owners will be mostly barred from buying next year. That’s eased fears of a huge oversupply.

While that shift in crude output should result in less high-sulfur fuel oil, it raises a different question: will producing the new, cleaner fuels that ships need also become easier?

The short answer is yes, at least a little bit, according to Wood Mackenzie. Overall, the crude coming out the ground in 2020 has a slightly higher yield of the middle-distillate type fuels that will be used by ships, according to an analysis by the firm comparing the market with 2016. One concern, though, is that the abundance of lighter crudes also risks creating a glut of naphtha, a product used to make gasoline and petrochemicals.

At the same time as crude supplies have shifted, rising uptake among shipowners of scrubbers -- fuel-cleaning equipment that allows vessels to continue burning high-sulfur fuel oil from 2020 without breaking the rules -- has rocketed since 2017.

That, in turn, has boosted expectations of future demand for the dirty product. Next year, more than 3,600 vessels will be fitted with the units, according to DNV GL, more than ten times the amount that was scheduled to be installed back in 2016. Remember, too, that these are often bigger ships with disproportionately large fuel consumption.

Demand is further being boosted by refiners spending on new equipment that cuts high-sulfur fuel oil output. An additional 400,000 barrels a day of so-called coking capacity is scheduled to be added this year, and a further 180,000 barrels a day in 2020, according to IEA data compiled by BloombergNEF.

Even with the shifting global crude slate and extensive preparations from shippers and refiners, there’s still likely to be an oversupply of high-sulfur fuel oil when the new rules kick in. BloombergNEF forecasts a surplus of up to 1.52 million barrels a day next year.

In the forward market, prices of non-compliant material for delivery in 2020 have already slumped, recently falling to an $18 a barrel discount to Brent crude. Several analysts expect an even bigger drop.

He expects the discount to crude to average $30 per barrel in the first quarter of next year. Others are less bearish but agree with the trend: $23 per barrel is the figure given by Wood Mackenzie.

The market for gasoil is also being affected. While the 2020 crack -- or price relative to Brent crude -- is clearly reflecting a stronger market, the current $15.75 a barrel premium is weaker than expected: Wood Mackenzie sees the premium at an average $22 a barrel in the first quarter.

Part of the problem with predicting IMO 2020’s pull on gasoil is that nobody is certain what’s going to happen with its main competitor fuel, a product known as very low sulfur fuel oil, or VLSFO.

Sawyer estimates demand will be around 1 million barrels a day for the residue-based version of the new grade next year, while JBC sees supply for the same material at more than double that. Citigroup Inc. says a relatively weak gasoil crack could be because of a misplaced assumption about the uptake of VLSFO.

The market for VLSFO is hotting up. Mediterranean refiners have started to sell cargoes, while Exxon Mobil Corp. recently announced it plans to offer 0.5% marine fuels in seven ports across Europe and Asia. Tanker owner Euronav NV has been buying up low-sulfur product for storage on one of the world’s biggest vessels.

Last but by no means least comes the so-called gasoil-to-fuel oil spread -- a marker for the price difference between compliant and non-compliant product. Bound up in this number are, essentially, the billions of dollars invested by shippers in scrubbers along with the hopes of refiners who have splashed out on expensive upgrading units.

With HSFO currently seen by some observers as overpriced and gasoil undervalued, the analysts expect the 2020 spread to widen from its current $305 a ton. Sawyer sees it reaching $350-400 a ton in the first quarter as refiners struggle to eliminate HSFO production. Wood Mackenzie anticipates it widening to about $380 a ton.

(Updates with figure from BloombergNEF in 12th paragraph.)

--With assistance from Bill Lehane and Richard Chatterton.

To contact the reporter on this story: Jack Wittels in London at jwittels1@bloomberg.net

To contact the editors responsible for this story: Alaric Nightingale at anightingal1@bloomberg.net, Rachel Graham