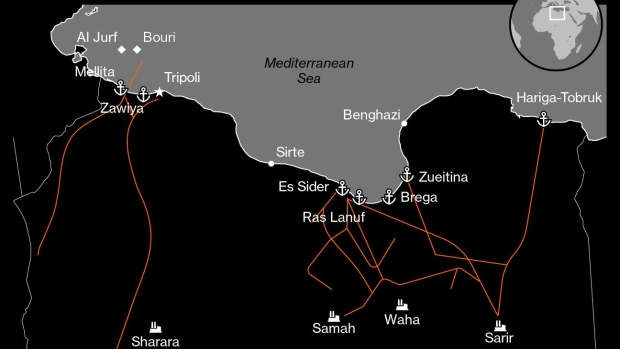 (Bloomberg) -- Libya’s oil production has risen in the past two weeks, bringing hope the OPEC member’s exports can stabilize at more than 1 million barrels a day and provide relief to a tight global market.

Yet anyone looking for signs of how sustainable the rebound is should consider the catalyst: the gunpoint ouster of the state oil company’s chairman. Now holed up in Turkey, Mustapha Sanalla had to quit the National Oil Corp. after government troops arrived at its headquarters in the capital of Tripoli in mid-July.

Since his downfall, the government has persuaded militias to reopen several oil fields and ports, with the extra shipments alleviating pressure on a stressed European energy market. Still, the nature of his removal speaks to the profound political divisions that continue to blight the country.

“The decision is turning out to be very controversial” among politicians in Tripoli, said Jalel Harchaoui, a Libya specialist at the Royal United Services Institute think tank. “It’s going to create all kind of short term crises, from insecurity to potential clashes.”

Tankers that had been hovering off the coast, waiting for ports to open, are back at Libyan shores lifting crude. Exports averaged around 589,000 barrels a day in July, the lowest level since October 2020, according to tanker-tracking data compiled by Bloomberg. But shipments more than doubled in the second half of the month.

Production collapsed in mid-April when protesters forced the closure of several oil sites and export terminals. Many called for Abdul Hamid Dbeibah, the United Nations-recognized prime minister who’s based in Tripoli in the west, to step down. His main rival is Fathi Bashagha, who also claims the premiership and draws most of his support from the east of the country.

The move by Dbeibah’s government to replace Sanalla with Farhat Bengdara, a former central bank governor under late dictator Moammar Al Qaddafi, was seen as a way to appease eastern powerbrokers, including Khalifa Haftar, a general whose supporters control many of Libya’s oil fields.

The NOC was drawn into Libyan politics under Sanalla, who was chairman from 2014 and negotiated with energy companies such as BP Plc and Eni SpA. Some eastern politicians said the company was withholding funds from the region, which it denied.

Sanalla was also opposed by Oun. The oil minister tried several times to dismiss Sanalla after being appointed early last year. He was the first person to hold the position since 2015, ending a vacuum that had allowed Sanalla to effectively run the energy sector himself.

Libya’s been mired in chaos since Qaddafi was deposed in 2011. There’s been relative calm since warring parties agreed a ceasefire in mid-2020. But it’s looked increasingly fragile after presidential polls scheduled for December were canceled at the last minute.

Sanalla’s exit may help in the short term. But in the longer-term, analysts say the standoff between Dbeibah and Bashagha won’t be resolved until elections are held.

Without a political resolution, it’ll be difficult for the NOC to keep crude flowing at today’s levels, let alone reach the government’s production target of between 2 and 2.5 million barrels per day within five years.

“It is a fragile-peace moment since political divisions have reached new highs,” said Illiasse Sdiqui, an associate director at risk-management company Whispering Bell. “The NOC will likely retain its integrity for the months to come, but the current context is challenging for international oil companies operating on the ground.”