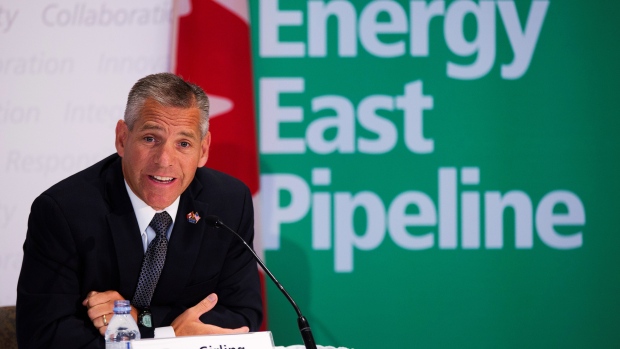 TransCanada pulled the plug on its Energy East project Thursday “after careful review of changed circumstances,” triggering reaction from many experts and leaders across Canada.

Here’s what some of them are saying:

“It’s not a surprise. [TransCanada] stopped their regulatory process — they said they were going to delay it — a month ago. But now that the news is out there, it’s pretty devastating to Canada in many ways.”

"That our taxpayers in Saskatchewan and Alberta will continue to send, without question, about $2.5 billion in equalization payments to help support Quebec that receives $11 billion in equalization per year and $1.4 billion to Ontario. All of this despite the fact that low energy prices have resulted in job losses and lower revenues for the last 4 years.

Something needs to change. For the west to continue on like this in our federal system is the equivalent of having Stockholm syndrome."

"While the current federal government has complicated things by adding greenhouse gas into the Energy East assessment, the real problem is that pipeline companies are routinely spending $500 million to $1 billion to go through a regulatory process only to run into a brick wall at the end of it for some reason that was not even part of the process."

“We’re disappointed. We supported the Energy East Pipeline, which would have offered supply flexibility for our Montreal refinery. We have a position in all other pipeline projects and no single pipeline decision will constrict our ability to grow and develop.”

“This is an unfortunate outcome for Canadians. We believe this nation-building project would have benefited all of Canada through new jobs, investment, energy security, and the ability to displace oil being imported into Canada.”

“Canadians have to look in the mirror and decide: ‘Is this what we want?’ Do we want to continue to receive sub-optimum prices for our resources? Would we be better off simply having a debate as to whether we want to produce the resources or not?”

“This was a business decision. While we recognize the current market challenges related to lower commodity prices, we’re seeing signs of growth in the sector.”

“Given the positive signals the federal government has sent to TransCanada over the last weeks – by providing certainty on the process and offering to pay for the additional costs of the [greenhouse gas] analysis – we believe it is clear that TransCanada is not proceeding with its application for the Energy East pipeline because recent changes to world market conditions and the price of oil have negatively impacted the viability of the project.”