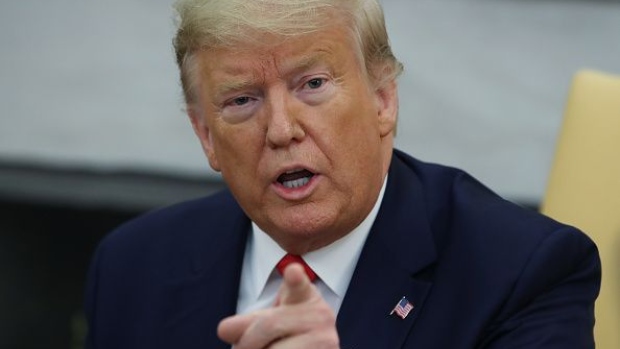 I’m not sure what the conventional wisdom is about the current health of Donald Trump’s presidency, but at least one version we’re hearing is a triumphant one: He has defeated impeachment and is now stronger than ever.

Oh, Trump is certainly trying with some success to take revenge on various real or perceived enemies. And he absolutely has a go-ahead from Republicans in Congress to politicize the Justice Department. The odds seem higher than ever that the Democratic presidential nominee, whoever that turns out to be, will be the subject of a formal investigation, however little evidence of wrongdoing there might be.

Just this week, the Senate gave Trump another black eye: Eight Republicans joined Democrats to support a war-powers resolution that would constrain the president’s options in Iran. Granted, that number is far short of what would be needed to override an expected veto. But it’s hardly a show of support: Eight senators who just last week voted to acquit him in the impeachment trial now voted to reduce his ability to do whatever he wants in foreign policy — something that Trump’s lawyers argued was an inherent power of the presidency.

Meanwhile, it appears likely that yet another Trump nominee for the Federal Reserve Board is going to be defeated. Judy Shelton is facing more than a little skepticism from Senate Republicans in addition to solid opposition from Democrats. The president has had a series of Fed nominees or potential nominees spiked because they couldn’t get confirmed. Yes, President Barack Obama had Fed nominees defeated, but only by Republican filibuster. (This was back when executive-branch nominations could be defeated that way; now they only need a simple majority to be confirmed.)

And in the House, the Democratic majority has only just begun to exploit Trump’s unending scandals, such as how much his private businesses have been pocketing in taxpayer money.

It’s not just Congress that presents a challenge to the president. He’s so worried about people in the executive branch — within the White House — who are out to get him that he’s systematically undermining his own ability to do his job.

This is an excellent plan if he’s planning to commit crimes in future calls, and not a terrible idea if he embarrasses himself and doesn’t want it to be known within the government or leaked to the media. But if he wants to use those calls to actually govern, it’s a disaster.

Not only will it make it easy for foreign nations to invent their own version of what was said without fear of being corrected; it will also make it almost impossible for the U.S. to follow through on Trump’s decisions. After all, in many cases the people who have to carry out the policies won’t know what commitments the president has made. He may think that he speaks and things happen all by themselves, but that’s not how the U.S. government works.

There are numerous signs already of failed policy coordination, most recently the possibility that the Philippines may scrap the Philippines-U.S. Visiting Forces Agreement. The more Trump rids himself of staff he doesn’t trust and tries to govern with a handful of family and loyalists, the more the government will be an unwieldy, uncoordinated mess of fiefs run by those skilled at flattering Trump and then going off and doing what they want.

So far this hasn’t derailed the economy or provoked any foreign-policy disasters significant enough to affect public opinion. But it’s no way to run a government — or to maintain a functioning democracy.

1. Norm Ornstein on waiting to get the election count right. Good to see several people pounding on this point publicly. Now, we need more folks on TV to repeat it.

2. Seth Masket has his latest survey of Democratic early-state activists.

3. Lauren Wright at the Monkey Cage on celebrity politicians.

4. Megan Messerly on how Nevada Democrats are planning to report caucus results. Remember: The national Democratic Party changed a lot about how to conduct caucuses for this election cycle; that’s why Iowa Democrats came up with new procedures, which, of course, failed miserably. We’ll see how Nevada Democrats do — they haven’t always smoothly administered these caucuses.

5. Dean Baker on Pete Buttigieg and the deficit.

7. And my Bloomberg Opinion colleague Conor Sen is bullish on economic growth.

Get Early Returns every morning in your inbox. Click here to subscribe. Also subscribe to Bloomberg All Access and get much, much more. You’ll receive our unmatched global news coverage and two in-depth daily newsletters, the Bloomberg Open and the Bloomberg Close.