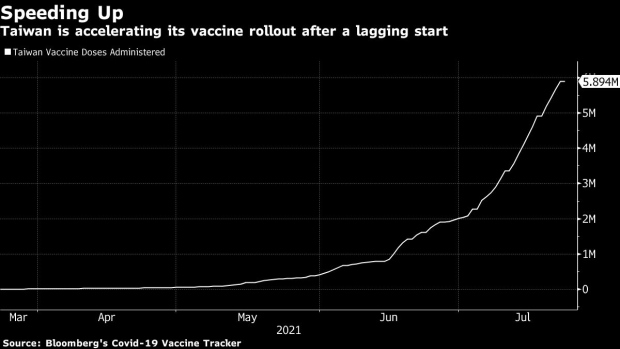 A health worker announces capacity has been reached at a temporary Covid-19 rapid testing center in the Wanhua area of Taipei, Taiwan, on Saturday, May 15, 2021. Taiwan imposed restrictions on gatherings and ordered entertainment businesses to shutter operations as it raised the alert level in its capital to battle a surge in local Covid-19 infections. , Bloomberg

Taiwan won plaudits for its successful containment of Covid-19 last year, which made its recent virus resurgence all the more surprising. Data shows it was unusually deadly, as well.

While Taiwan has seen fewer than 800 Covid deaths in total, 500 of them occurred in June alone, amid its biggest virus wave to date. The pathogen got through the stringent border curbs that had kept local infections at bay for most of 2020, seeding an outbreak that tore through the then-largely unvaccinated elderly population.

This pushed the case-fatality ratio to as high as that seen in Italy and the U.K. in the first months of 2020 when the disease was a mystery. Overall, Taiwan’s fatality rate of total cases to total deaths since the pandemic began is 5%, much higher than nearby Hong Kong’s 1.8% and the 0.1% rate in Singapore.

These places, like Taiwan, avoided the caseloads and death tolls of western nations and were also similarly ranked highly on quality of health-care provision pre-pandemic.

As the outbreak finally abates and restrictions are slowly lifted, with curbs on larger social gatherings and tourists sites easing this week, attention is turning to what went wrong. Medical experts say that Taiwan -- which once went 200 days without a case in the community -- was unprepared.

Hong Kong, which has implemented a similarly hardcore border and quarantine policy aimed at keeping all cases out, used its four virus waves to learn and build capacity, said Lam Ching-choi, a medical doctor in the financial hub who is an adviser to the city’s leader and a member of the government’s working group on vaccination. But Taiwan appears not to have done enough to ramp up testing capabilities, medical system readiness or vaccine supply.

“I’m actually quite disappointed to see it -- maybe I assumed wrongly that they would spend the last year building up capacity,” he said.

Taiwan’s high death rate highlights the cost when governments don’t seize the opportunities presented by a lull in cases to ramp up vaccinations, improve testing capabilities, and boost the capacity of hospitals. While vaccine supply has been an issue, the government also signed orders later than others in the region.

The relatively large number of deaths over a short period also shows the risk to places in Asia pursuing a “Covid Zero” strategy of trying to eliminate cases rather than treat the pathogen as endemic. The danger is particularly acute for developed economies like Hong Kong, New Zealand and Australia as they try to stamp out the highly transmissible delta variant raging across the world.

The new variant has evaded Australia’s heavy border restrictions, similar to Taiwan’s with weeks-long quarantines and limits on travelers. Taiwan itself now says it’s no longer aiming to stamp out infection totally, but just to bring cases down to a manageably low level.

The high fatality rate in Taiwan is due to the virus wave hitting older people, with 90% of deaths occurring in those aged 60 or older, said Chuang Jen-hsiang, a spokesman for Taiwan’s Central Epidemic Command Center. The surge in cases also put a strain on the island’s hospitals, leaving some infected people at home or in centralized quarantine facilities, he said.

“Taiwan, like many other countries, couldn’t adjust medical capacity quickly when the outbreak happened, which led to a high fatality rate in Taiwan and globally,” Chuang said. “No matter how many hospital beds you have, it will never be enough. We do have contingency plans, but it takes time to react.”

Taiwan’s medical care system is also run on a tight budget to keep costs affordable -- there’s a spending cap across all hospitals and clinics annually and these institutions compete with one another for funding, unlike in the U.K. or Canada where each body has its own budget, said Chang Hong-jen, adjunct professor at the National Yang Ming Chiao Tung University’s Institute of Public Health and a former head of the Taiwan Centers for Disease Control.

This meant that there was very little excess capacity in the system that could be quickly pivoted when Covid-19 surged and it was “caught by surprise,” he said.

“Why isn’t there redundancy in the health care capacity? It’s all about money,” he said in a telephone interview. “The government needs to be willing to pay for the redundancy so that we can have spare capacity.”

To be sure, in a fast moving pandemic, the case-fatality ratio is at best a proxy to give a real-time assessment of the seriousness of an outbreak. It doesn’t capture the exact mortality risk of an infected person from Covid-19, given the time lag between the onset of the disease and the outcome of death or recovery.

And case-fatality ratios vary widely across locations and over time. Places that initially saw spikes, like the U.K. and Italy during their first waves, have seen the ratio fall as policy makers and doctors learned how to best cope with the disease and keep patients alive.

While still behind other parts of Asia, including Hong Kong and Singapore, Taiwan’s vaccination rates have begun to tick up following emergency deliveries from the U.S. and Japan, suggesting any renewed outbreak is unlikely to have similar numbers of fatalities. Taiwan has now inoculated over 60% of people aged 65 years or older, according to its epidemic command center, while the share of those overall who have received at least one shot has exceeded 25%.

“It’s hard to make preparations in advance if it’s not happening to yourself,” said Tony Chen, a professor at National Taiwan University’s College of Public Health. “We hope Taiwan can learn this lesson.”