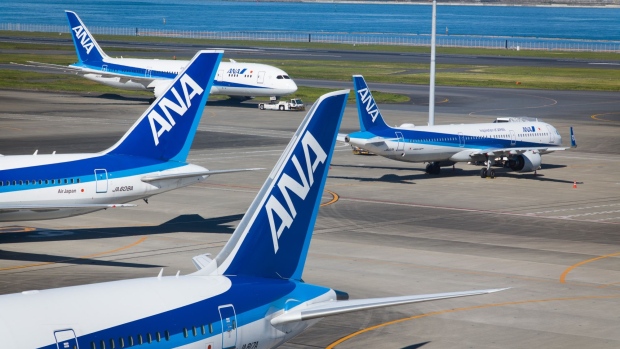 A tug pulls an All Nippon Airways Co. (ANA) aircraft past other planes operated by the airline at Haneda Airport in Tokyo, Japan, on Sunday, Oct. 25, 2020. ANA plans to temporarily transfer workers to other companies as the Japanese airline faces billions of dollars in losses, forcing it to come up with restructuring measures to survive the plunge in air travel from the pandemic. Photographer: Kentaro Takahashi/Bloomberg , Bloomberg

(Bloomberg) -- ANA Holdings Inc. will raise as much as 332.1 billion yen ($3.2 billion) via an overseas share placement as airlines around the world rush to shore up their finances amid the coronavirus pandemic.

Japan’s largest carrier, whose shares have slumped 30% this year, will use the proceeds to repay long-term debt and buy Boeing 787 aircraft to improve its capacity “to optimize supply to demand, and reduce negative environmental impacts,” according to a statement Friday.

Airlines globally are mired in their worst-ever crisis as passenger traffic plunges due to the outbreak and virus cases show no sign of abating across the Northern Hemisphere ahead of winter. While there’s hope a Covid-19 vaccine will get people back on planes, carriers are still expected to lose a combined $157 billion in 2020 and 2021, according to the International Air Transport Association.

ANA’s move comes after the nation’s other major carrier Japan Airlines Co. last week said it would raise as much as much as $1.75 billion in a share sale. JAL, which received a government bailout after filing for bankruptcy a decade ago, will offer the shares at a 3% discount. Some of the money it’s raising will be used to repay debt, with the goal of making it easier to issue bonds or borrow funds from banks in future, a JAL official said.

ANA is forecasting a record net loss of $4.8 billion for the fiscal year through March 2021. It unveiled a restructuring plan last month that calls for, among other things, around 400 billion yen in cost reductions by cutting procurement, office rents, the temporary transfer of hundreds of employees to other companies, and the retiring or halting of orders for 33 aircraft to bring the group’s fleet down to 276 planes.

Although Japan’s government launched a ‘GoTo’ domestic tourism campaign to prop up the deteriorating economy, it hasn’t been a great success with people reluctant to travel due to fear of catching the virus. Case numbers are spiking again in cities such as Tokyo and Osaka and economy minister Yasutoshi Nishimura said earlier this week the government is taking advice to possibly halt the campaign.

Overseas visitors to Japan were down 99% in October from a year earlier as the country largely kept its borders shut.

Heizo Takenaka, an economist who served as a minister and is an adviser on Prime Minister Yoshihide Suga’s Growth Strategy Council, said this week that ANA and Japan Airlines will eventually need more support and that they should “become one.” In neighboring South Korea, the two biggest airlines plan to merge, with Korean Air Lines Co. hoping to acquire Asiana Airlines Inc.