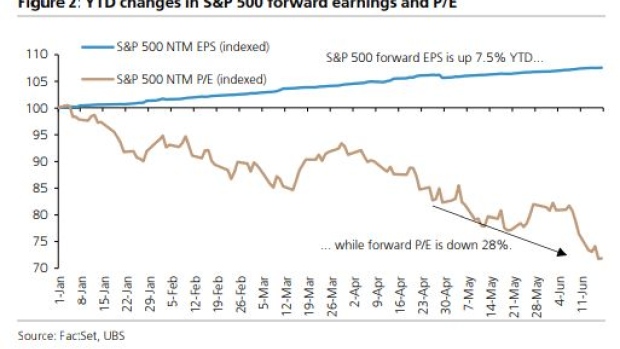 (Bloomberg) -- If there’s anything approaching a consensus opinion in the market pundit class, it’s that estimates for S&P 500 earnings are too high. Some newly unearthed data suggests that may not be true.

At issue are the forecasts of analysts whose vocation is to gauge the well-being of individual companies -- and whose predictions that it will improve next year have barely budged. While stock commentators and investors have been throwing mud at this view for months, analysts themselves have shown signs of being increasingly convinced their estimates will bear out.

Analysts have upped their 2022 forecasts over the past month. They expect companies in the S&P 500 to see profits grow by 10.6%, up from 10% a month ago and 8.7% at the start of the year, according to Bloomberg Intelligence. Meanwhile, an indicator known as estimate dispersion, measuring how much the highest and lowest analyst per-share predictions vary on the average stock, has remained stable even as the S&P 500 has sold off enough to fall into a bear market, according to data compiled by Credit Suisse.

Rather than loosen as uncertainty builds, dispersion has actually become tighter than average in nine of 11 sectors in the S&P 500, the data show.

Recession worries were front and center Thursday in the bond market, where Treasuries rallied after a batch of economic data came in weaker than forecast. The 10-year yield slid back toward 3% after spiking to 3.49% just nine days ago, further raising skepticism that Corporate America will be able to deliver big earnings gains.

While that continued a string of economic data-points that have been weaker in recent weeks, Palfrey added, many are overlooking a few key positive factors: the benefit of inflation to companies, for one, and the fact that the economy is decelerating from a very high economic base.

“GDP is moving from way-above trend to something that is headed toward trend at the moment, and that gives plenty cushion for companies to continue to deliver on profits,” Palfrey said.

A lot will depend on what happens with the economy as the Federal Reserve tightens at a pace so fast that it threatens to squeeze out growth and torpedo corporate profits. Strategists at Morgan Stanley warned recently that companies are too slow in guiding down, predicting a comeuppance for investors after second-quarter earnings season, which starts in three weeks. Elsewhere, Yardeni Research’s Ed Yardeni lowered his S&P 500 earnings estimates for this year and next, one of many strategists to do so in recent weeks.

To be sure, Palfrey says that should dispersion loosen, it would be a harbinger of potential deterioration in profits. History shows that both equity volatility and the dispersion gauge tend to precede analyst downgrades.

But so far, analysts just haven’t been downgrading their price targets for the S&P 500. The market’s plunge this year has left share prices well below analyst projections, according to Jake Gordon at Bespoke Investment Group. As of the end of last week, the S&P 500 was trading 25% below its bottoms-up consensus analyst price target, one of the widest divergences on record going back to the early 2000s.

Though there are risks to the downside, earnings forecasts still look achievable, says Keith Parker at UBS. His baseline forecast of slowing growth, but no recession, sees S&P 500 earnings per share coming in at $235.5 this year, and $250 in 2023. Projections excluding financials and energy are set to slow from 8% this year to 4% next year, he said, though those two sectors are driving more upside. Oil prices, for one, point to further energy EPS upgrades.

The market right now essentially reflects equal odds of near-term corporate earnings power increased or decreasing by 10%, according to Nicholas Colas, co-founder of DataTrek Research. The S&P 500’s Friday close around 3,675 is exactly where it might trade should current earnings projections hold for the rest of the year and into 2023.

The downside levels to watch for the index are between 3,300-3,500, which would reflect a 10% drop in near-term corporate earnings. It would take a roughly 7% decline from the S&P’s current levels to bring it to 3,500. The upside case for the index, though, is 4,100, which implies earnings per share of $240 for the year, Colas said.

“Our own view is that earnings are more likely to decline than increase but, if you are more optimistic, the math we have presented above gives you a framework to quantify that perspective,” he wrote in a note.