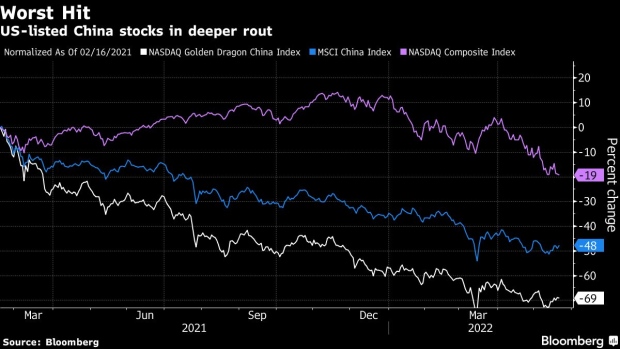 The fund, which was hurt by bargain hunting for Chinese shares since late last year, dropped less than half a percentage point in April, according to people familiar with the matter who asked not to be named discussing private information. The fund has lost about 22% this year, the people said. It managed $1.9 billion as of March, one of the people said.

The smoother ride last month came after Anatole slashed the fund’s gross exposure -- the combined value of long and short wagers -- to less than 110% of fund assets, Chief Investment Officer George Yang wrote in a commentary sent to investors in April. It also cut net exposure -- the difference between the two types of bets -- to near zero. Both are indications of a more defensive stance.

Anatole’s struggles highlight the perils of seizing opportunities to buy Chinese equities during the selloff. Many investors have remained on the sidelines, unable to tell when sentiment may turn a corner amid a raft of regulatory, political and inflation concerns.

Anatole started to bottom-fish the nation’s stocks in late 2021 “in the belief that a few buckets of Chinese assets were cheap enough and that China had begun to start a loosening cycle” and should outperform, Yang wrote in the commentary seen by Bloomberg. “The result turned out to be disastrous: we were wrong.”

Government crackdowns have enveloped industries as wide-ranging as e-commerce, ride-hailing and after-school tutoring. The risk of Chinese companies being delisted from US exchanges has also hurt sentiment. The Nasdaq Golden Dragon China Index ended 2021 57% off its February 2021 peak, only to dive another 28% this year.

Anatole’s fund lost around 10% in December, paring its annual gain to 4%, according to the people. What ensued was the worst quarterly loss since its 2016 inception, Yang said.

“Anatole underestimated and underappreciated the power of this phase change,” he wrote, referring to the end of the “Wild West”-like growth of Chinese private companies fueled by state funding and venture capital money.

For now, the firm will be more selective in China investments, looking instead at more US companies, Yang wrote in the commentary sent out around the Easter weekend.

Anatole’s largest gross exposure remains in Greater China, and it’s net bullish on the region, Hong Kong-based Chief Operating Officer Gary Lee told Bloomberg, while declining to comment on the numbers. It has always invested in both Chinese companies and those in the rest of Asia, US and Europe, using its home-market research and industry expertise to identify opportunities elsewhere.

The firm exited 12 US-listed holdings in the first quarter, according to Bloomberg data based on regulatory filings. Those include Chinese group-buying company Pinduoduo Inc. and data center operator GDS Holdings, as well as Dutch-US data search firm Elastic NV and US analytics company Amplitude Inc. The filings gave a snapshot of its bullish investments in US-listed securities at the end of March, without shedding light on bearish bets, its holdings of stocks listed elsewhere, or trading during or after the quarter.