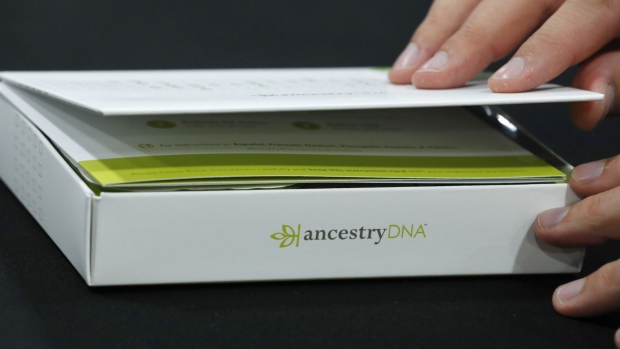 An attendee views an Ancestry.com Inc. DNA kit at the 2017 RootsTech Conference in Salt Lake City, Utah, U.S., on Thursday, Feb. 9, 2017. The four-day conference is a genealogy event focused on discovering and sharing family connections across generations through technology. Photographer: George Frey/Bloomberg , Bloomberg

(Bloomberg) -- Blackstone Group Inc. is looking to sell $2.8 billion of debt for its buyout of Ancestry.com Inc. this holiday-shortened week, while just a handful of investment-grade borrowers are expected to come forward.

Marketing for Ancestry’s $1 billion high yield portion ends Monday, while commitments on its $1.8 billion leveraged loan are due the same day. Ancestry is the sole deal currently slated to price in high-yield, but it follows the busiest week for issuance in about two months with about $15.7 billion sold, according to data compiled by Bloomberg.

A drop in average yields to all-time lows earlier this month opened up the spigots for companies seeking to lock in low rates. Investors are also piling cash into funds that buy the risky debt, and there’s little sign of that demand waning.

Carnival Corp. received orders worth over $11 billion for its first unsecured bond offering since the pandemic with demand growing even after U.S. Treasury Secretary Steven Mnuchin unexpectedly called for several emergency lending programs to be stopped at the end of the year. The cruise operator also managed to boost the size of the deal, borrowing at a rate of just 7.625% without pledging any assets -- far below the double-digit coupons on its bonds that sold a few months ago that were backed by idled ships.

It’s a similar dynamic in the leveraged loan market, where deals have been mostly well received. Inspire Brands Inc. slashed pricing on a $2.6 billion loan supporting its $11.7 billion purchase of Dunkin’ Brands Group Inc. At least eight deals have commitments due this week for total volume of $4.3 billion, and there are no lender meetings scheduled as the market winds down for the holiday.

While a gauge of U.S. credit risk known as the Markit CDX investment-grade index increased by the most since Oct. 28 on Friday, money managers and strategists see Mnuchin’s efforts as having only a muted impact on credit markets in the near term because the facilities are rarely used now.

“This is purely politics and ‘polytricks’ but unlikely to have any real impact on markets or the economy as these facilities have had more symbolic value than actual value given limited utilization,” said Christian Hoffmann, a portfolio manager at Thornburg Investment Management in Santa Fe, New Mexico.

In the investment-grade market, Wall Street syndicate desks are predicting issuance to slow dramatically, with forecasts ranging from zero to $5 billion. Blue-chip companies raised $40 billion last week, surpassing the highest projection of $30 billion. Supply for the month has also exceeded expectations, and early estimates for December call for about $25 billion.

Among the highlights last week was Allstate Corp.’s $1.2 billion bond sale. The insurer hired solely banks owned by minorities, women or veterans for the deal, the biggest corporate issue managed only by diverse firms.

The U.S. bond market will be shut Thursday in observance of the Thanksgiving holiday, and close at 2 p.m. in New York on Friday.