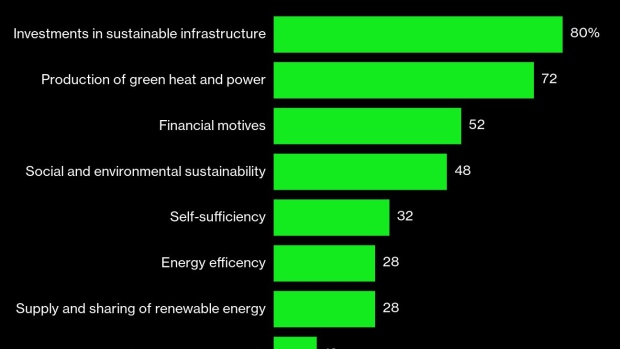 (Bloomberg) -- A thousand-year-old Swedish village could become a blueprint for local energy grids of the future.

Simris, with a population of about 200, has shown that operating independently from the national grid is technologically possible. Villagers use locally produced renewable energy stored in freezer-sized batteries in their homes.

In an age when the risk of sweeping blackouts is growing, it’s an experiment that could be replicated elsewhere as the European Union legislates to support such projects. Households in Simris are harnessing the falling costs of renewable energy and batteries -- and satisfying a desire for self-sufficiency. Substantially lower utility bills are an added bonus.

“It just feels right to use whatever comes for free from heaven,” said Lars Goran Lefvert, who moved to Simris from Stockholm when his wife Karin retired. They have 20 solar panels over two buildings framing a grassy courtyard. Their residential battery is kept in the outhouse. Any surplus energy is sold back to German energy giant EON SE, which runs the local grid and set up the project as an experiment with EU funding.

Electricity has traditionally been supplied by large power stations using fossil fuels or nuclear energy. The power is distributed through national grids to smaller distribution networks and to end-users. Concerns around climate change and energy security are increasingly challenging that business model. Utilities, urged by lawmakers, are embracing renewable solutions, learning from experimental projects and figuring out how to make money from it.

The growth in renewable energy is bringing cleaner electricity and allowing people to explore new supply and demand models. Villagers in places like Simris, where wind and sun are abundant, have taken advantage of the falling cost of batteries and tapped government incentives to invest in solar panels. Now they increasingly sell their power back to utilities. Others experimenting with local grids include Germany’s Hindelang, a village of 5,000 people.

Simris sits on rolling hills about a mile from the Baltic Sea on the nation’s southeastern tip, an area known as Sweden’s Provence. The past and future blend outside a whitewashed stone church, where 11th-century rune stones sit next to an electric vehicle charging station.

During a recent visit, the sky was blue and the wind was brisk, providing ample free green power. Real-time data on EON’s website showed the wind and solar plants generated substantially more than the entire village consumed.

It’s been a steep learning curve, said Jorgen Rosvall, the project manager at EON. Among the greatest challenges was keeping the right frequency in the system and balancing supply and demand using everything from the solar and wind plants to heat pumps, batteries and hot water cylinders in the homes. Throughout, the villagers have remained customers of their power suppliers.

“It would be great if Simris could work as a blueprint for other villages,” Rosvall said. “We’re working on it in other projects, not only in Sweden but everywhere EON is active.”

Vattenfall AB, the Nordic region’s biggest power company, is also exploring this corner of the industry.

“It’s an important piece of the puzzle, but it will not solve all the great challenges we face,” said Anna Borg, the utility’s chief executive officer.

Off-grid communities could start popping up all over Europe when a new law comes into effect later this year, allowing peer-to-peer energy deals.

The European Commission’s most recent estimates from 2016 found that 17% of wind turbines and 21% of solar projects could be owned by citizen-led energy communities by the end of the decade. Another 2016 study predicted almost half of EU homes will produce renewable energy by 2050.

A lot has happened since. The cost of renewable energy has plummeted and the EU has set a climate neutrality goal by mid-century. The bloc’s Clean Energy Package will recognize the right for citizens to engage directly in the industry, formally setting out a legal framework for so-called “energy communities.”

“The Clean Energy Package lays some firm foundations for broader societal engagement in energy systems, without which we’ll fail to meet net-zero ambitions,” said Iain Soutar, a Human Geography lecturer at the U.K.’s University of Exeter. “It’s important that electricity markets keep pace with technological and political developments, and the CEP provides much-needed impetus for regulatory change across member states.”

Europe will lead in decentralized energy. As legacy coal, gas and nuclear power plants retire, the average station capacity will shrink. In 2050, the global median will be 158 megawatts, a sixth of today’s output, according to BloombergNEF. In Europe it will fall to just 32 megawatts, with more than two-thirds of supply injected into small local networks, rather than large national grids.

Still, the EU has highlighted the risk to supply security and said local initiatives must still be connected to the main grid in case of emergencies. And scaling up mini-grids across countless communities will be daunting task.

Rolling power outages in Texas in February showed that even a roof full of solar panels won’t help unless homeowners also have the right storage equipment. That was illustrated by a video clip online of the single house lit by a Tesla power wall in a blacked-out Houston neighborhood.

A boom in German solar power led homeowners to seriously consider local energy solutions, said Fredrik Lundstrom, a program manager at the Swedish Energy Agency. An increasing number of people, known as “prosumers,” want their power to stay in the neighborhood rather than feed into the regional grid.

“The power system will work more like a laptop computer,” Lundstrom said. “When you pull out the plug you can still work on it.”

In Simris, Helen Tornblom, who lives in the red-bricked former village school built in 1912, looks forward to the coming months because of the substantial credit on her utility bill. And she’s still thinking of ways to save energy.

“I changed my main door because I was so tired of all the heat that I lost,” she said. “And insulated all my windows.”