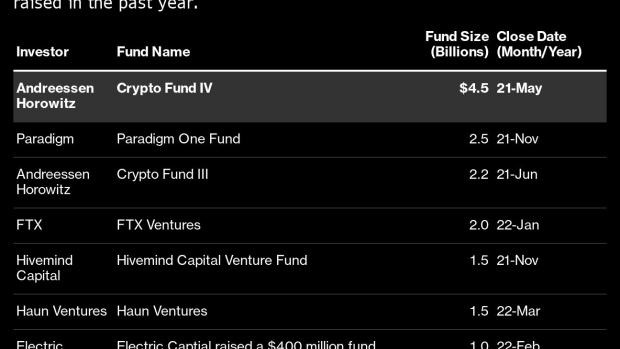 An illuminated Bitcoin sign inside a BitBase cryptocurrency exchange in Barcelona, Spain, on Monday, May 16, 2022. The wipeout of algorithmic stablecoin TerraUSD and its sister token Luna knocked more than $270 billion off the crypto sector’s total trillion-dollar value in the most volatile week for Bitcoin trading in at least two years. Photographer: Angel Garcia/Bloomberg , Bloomberg

Sagging crypto prices and the collapse of the TerraUSD stablecoin are no deterrent for venture capitalists who still see a lot of promise in the industry. In the latest example of that commitment, Andreessen Horowitz said Wednesday that it had raised a $4.5 billion crypto fund, the industry’s largest to date.

The firm is dedicating $3 billion to venture investments and $1.5 billion to seed investments. The fund, the fourth crypto-dedicated investment vehicle for Andreessen Horowitz, brings its total digital-asset-focused efforts to $7.6 billion. It has backed some of the biggest names in blockchain, including crypto exchange Coinbase Global Inc., nonfungible-token marketplace OpenSea, NBA Top Shot creator Dapper Labs and Sky Mavis, the developer of NFT game Axie Infinity.

With the fund, Andreessen Horowitz blows past initiatives raised in the past year by “crypto-native” firms that have been some of the industry’s biggest cheerleaders. They argue that they better understand the complexities of blockchain and the politics of token governance in comparison to traditional firms that spread out their bets. Included n this cohort is Haun Ventures, the firm started by former Andreessen Horowitz general partner Katie Haun, who raised $1.5 billion dedicated to crypto investments.

Andreessen Horowitz has taken some steps to give it more of a crypto-native flavor, like launching a research arm stacked with crypto experts to help its portfolio companies and delegating voting stakes to organizations like student clubs in an effort to dilute their influence. These measures, along with the new fund, might not be enough to convince critics that Andreessen Horowitz has crypto’s best interest at heart.

Despite investing in startups that now make up some of the industry’s biggest cornerstones, Andreessen Horowitz’s influence in crypto, and that of venture capital, have proven controversial. The firm has doubled down on building “web3,” which refers to a decentralized version of the internet owned by users rather than tech giants. But Andreessen Horowitz’s investments, some of which include large crypto token purchases that correlate with major voting power over how blockchain projects are managed, have brought into question whether web3 is as decentralized as its supporters claim.

That tension came to a head when Block Inc. Chief Executive Officer Jack Dorsey sparred with Andreessen Horowitz’s Marc Andreessen and Chris Dixon. “You don’t own ‘web3’,” Dorsey tweeted in December. “The VCs and their LPs do. It will never escape their incentives.”

The dig resulted in a Twitter block from Andreessen and a barb from Dixon, who tweeted a reference to a Gandhi quote: “First they ignore you, then they laugh at you, then they fight you, then you win.”

“You’re a fund determined to be a media empire that can’t be ignored … not Gandhi,” Dorsey tweeted in response.