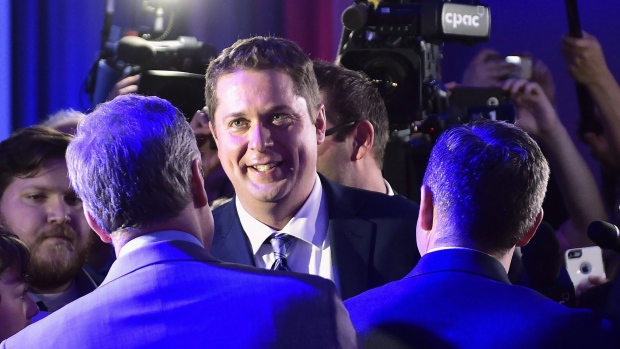 TORONTO -- New Conservative leader Andrew Scheer is expected to gather with fellow members of Parliament and senators today on Parliament Hill for the first time since his win.

The Saskatchewan MP and now Opposition leader clinched a victory in the 13th ballot against Quebec MP Maxime Bernier on Saturday night.

Scheer preached a message of party unity during the campaign, but now he'll have to put those words into action -- he beat not just Bernier but also several other sitting MPs.

In a show of solidarity, he had them all up on stage at the Toronto Congress Centre late Saturday night and the screen behind him read "united" in the minutes after his win.

Scheer did have significant support among other elected MPs going into the campaign, about two dozen by the end of it. Many of the rest had backed fellow MP Erin O'Toole.

When O'Toole dropped off the ballot, it appeared most of his supporters had picked Scheer as their second choice, as that's who won on the next, and final, round.

"I was on Erin O'Toole's team but our team is 100 per cent behind Andrew now," posted Edmonton MP Kerry Diotte on Twitter.

Whether MP endorsements had anything to do with his win is hard to tell.

But what do investors think of the new Conservative leader? One money manager says Scheer will be well-received on Bay Street.

“Will Bay Street like Andrew Scheer? I would say yes,” said Kingwest & Company Managing Director Tim Regan in an interview with BNN Monday. “Being more of a fiscal conservative, that’s what Bay Street wants. Bay Street just wants business to go on as is, wants more predictability.” After his inaugural meeting with caucus Monday, Scheer will face some other milestones.

The Liberals are set to make a defence announcement mid-morning that, while not the long-awaited defence policy review, could be the first time Scheer will need to respond on a file.

He will also make his question period debut in the House of Commons as leader of the Opposition.

Scheer told CTV's Question Period Sunday he had some ideas for a first question but hadn't settled on it yet.

He won't be posing it to Liberal Prime Minister Justin Trudeau, as he's out of the country on an official visit to Italy.

The political stakes have changed though for the Liberals, said Conservative strategist Alise Mills.

Scheer is younger than Trudeau, and with more experience than the prime minister had when he took over the Liberal party, she said.

"Andrew is a parliamentarian through and through," she said.

"He's going to be very quick on his feet in question period." 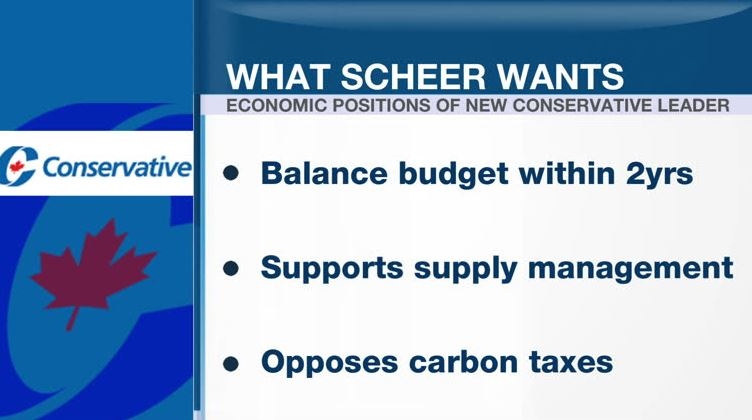 The Liberals are also aware the political playing field is different. In a fundraising email Sunday, they pointed out the Conservatives just finished their leadership race, a time when parties can connect with more people, welcome new members and raise more money, and Liberals asked for equal support .

"We now know who our competition is -- and all of our progress for a stronger middle class is at stake," the email said.

Scheer also has to look beyond the Commons and put the party on course for the 2019 election.

Central to success there will be victory in suburban and urban centres that the party lost in 2015. Scheer had mixed results there during the leadership campaign.

For example, in the Toronto riding lost by former finance minister Joe Oliver, Bernier triumphed with 67 per cent of points and he also took two out of three ridings in Etobicoke, the heart of the populist "Ford Nation" considered key to Conservative fortunes.

But in B.C., Scheer, nabbed the urban riding of Vancouver South -- home to the current Liberal finance minister but Conservative before that -- and also the suburban Coquitlam-Port Coquitlam, lost by the Tories in 2015 as well.

A question for all of the defeated leadership candidates, and MPs past and present, will be whether they will run for office under Scheer's leadership.

Congratulations to our new #CPCLdr @andrewscheer on an excellent campaign. Proud to be your wingman as we fight for Canada! 🇨🇦

Bernier said Saturday night he felt he still had a place, as did O'Toole.

"Proud to be your wingman as we fight for Canada," O'Toole tweeted.

Scheer will have the task of figuring out who his wingmen, and women, will be in the Opposition shadow cabinet.

People close to his campaign said he struck no deals in that regard during the leadership race, and it's likely he'll leave the current organizational structure in place over the summer and return with a refreshed bench for the fall parliamentary sitting.