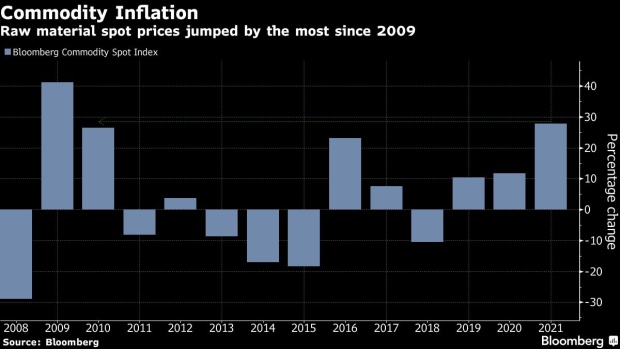 (Bloomberg) -- Commodities trader Pierre Andurand capped another strong showing in 2021, with one of his hedge funds returning 87%, according to two people with knowledge of the matter.

A spokesman for Andurand Capital Management LLP, which has offices in London and Malta and manages about $950 million, declined to comment.

Andurand, 44, has pocketed big gains from a surge in energy prices. Last year, he said the world was entering a bull market for commodities, supported by a global shift toward decarbonization. His firm has benefited from exposure to emissions and has previously been bullish on natural gas, European power prices and oil.

An index of commodities-focused funds climbed 24% in 2021, according to Chicago-based Hedge Fund Research Inc. That beat every sector apart from portfolios investing in cryptocurrencies, which surged 215%, HFR said.

The Bloomberg Commodity Spot Index, which tracks energy, metals and crop futures, jumped 27% in 2021, the most in over a decade. Markets from gas to coal, oil and aluminum rose amid a global economic recovery from the coronavirus pandemic and supply disruptions.

London-based Westbeck Capital Management LLP’s Energy Opportunity Fund also had a stellar year. It returned 4.2% in December, boosting the fund’s year-end return to 107%, according to an investor letter seen by Bloomberg.

A spokesman at Westbeck, managed by Jean-Louis Le Mee and William Smith, confirmed the returns.

While the rapid spread of the omicron variant of the virus could slow economic growth, many analysts predict more gains for commodities. Goldman Sachs Group Inc. is “extremely bullish,” citing low spare capacity among oil producers and the U.S. Federal Reserve likely raising interest rates later this year, which could deter investors from stocks and bonds.