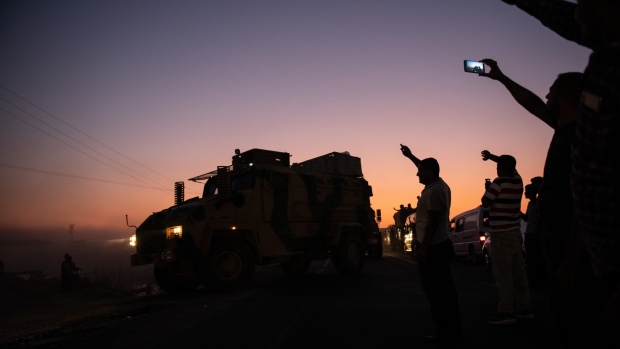 As the impeachment crisis worsens for U.S. President Donald Trump, it seems all roads lead to his personal lawyer Rudy Giuliani, who is now embroiled in scandals stretching from Ukraine to Iran.

In northeastern Syria, terrified civilians are trying to work out the safest way to flee as Turkish forces entered towns along the frontier between the two countries, just days after Trump said U.S. troops in the area wouldn’t stand in the way of Ankara’s military offensive.

Another conflict causing ripples throughout the world — the trade war — is showing a flicker of hope. After months of escalation, Trump offered a tacit embrace of something he has resisted for months: A partial deal.

Dig deeper into these issues and take a look at some of Bloomberg’s most compelling political photos from the past seven days.

Trump Urged Top Aide to Help Giuliani Client Facing DOJ ChargesFueling long-standing concerns about Trump’s governing style, it’s emerged he pressed then-Secretary of State Rex Tillerson to persuade the Justice Department to drop a case against an Iranian-Turkish gold trader who was a client of Giuliani. Tillerson refused, while others were shocked by the request, Nick Wadhams, Saleha Mohsin, Stephanie Baker and Jennifer Jacobs report.

Turkey Gears for High-Risk War Against a Familiar Foe in SyriaTurkey’s armed forces face a familiar opponent as they launch a major offensive in northeastern Syria. As Selcan Hacaoglu and Marc Champion write, they’ve been fighting versions of the Kurdish People’s Protection Units, or YPG, for 35 years.

Trump Mines Weak Spots in Foreign Leaders for Battles at HomeHe might be working to salvage his presidency, but Trump can still smell weakness in others. In his efforts to discredit his domestic enemies, he’s solicited help from Ukraine’s rookie president, a collapsing Italian government, an Australian battling China and Boris Johnson of Brexit-divided Britain, John Follain, Volodymyr Verbyany and Jason Scott report.

When This $2 Trillion Market Turns, Start Worrying About BrexitFor post-Brexit Britain, the kindness of strangers and their money will be more vital than ever, Anooja Debnath and John Ainger write. Prime Minister Boris Johnson has amped up his rhetoric that the U.K. will leave the European Union at the end of this month — even if there is no basis for a future relationship.

The Plane Crash That Helped a European Leader Take Over a NationThe news that a Polish air force plane had crashed in dense fog in April 2010 transfixed a nation. Among the dead were Poland’s president, his wife and dozens of top officials. The repercussions from that transformed the country from one of Europe’s great successes into one of its biggest renegades. Marek Strzelecki and Rodney Jefferson report.

Trump’s China Deal Yields Plenty of Questions, and CriticsWith the partial agreement with China he announced yesterday, Trump is back in dealmaker mode after months of escalation. But as Shawn Donnan reports, that doesn’t mean the new grand bargain he once promised with Beijing is any more than a small step closer to reality, or that a curtain is being drawn on the uncertainty his trade wars have brought to the global economy.

Moment of Truth on China Is Coming for Rest of Corporate AmericaLong before Daryl Morey’s fateful tweet — the one that set the NBA on a collision course with China — the nation had a history of employing economic might to twist corporate arms in Asia. As Matt Townsend reports, it was one of China’s most aggressive efforts yet to bend a western company to its will.

Stay Radical or Get Pragmatic? AMLO’s Party Has to Decide For most of its five short years in existence, Mexico’s Morena party has revolved around one politician: Andrés Manuel López Obrador. AMLO, as he’s known, was elected president in a landslide last July. Now his leadership is at a crossroads, Eric Martin writes.

GM’s Electric Future Means Prosperity for One Michigan Town, Disaster for AnotherEvery decade or so, GM undergoes a transformation to ensure the company’s long-term survival, write Bryan Gruley and David Welch. Invariably, these makeovers turn some communities into winners and others into losers — in this case, they’re separated by just 35 miles.

Two Mammoth Power Plants Are Sinking Eskom and South AfricaSouth Africa’s economy was roaring along in 2007, on the back of the global commodities boom, when power shortages struck bringing mines and smelters to a halt. State power utility Eskom Holdings swiftly opened the spending taps, but botched implementation of the expansion plan has haunted the country ever since, write Paul Burkhardt and Michael Cohen.

And finally ... The Arctic is emerging as a potential geopolitical flashpoint for the U.S., Russia and China as shipping routes get unblocked, Marc Champion writes. Melting ice is opening access to new energy resources faster than predicted, and it’s prompting a nascent great power struggle as the political and economic map of the world is transformed.

--With assistance from Muneeza Naqvi.

To contact the author of this story: Ruth Pollard in New Delhi at rpollard2@bloomberg.net

To contact the editor responsible for this story: Karl Maier at kmaier2@bloomberg.net