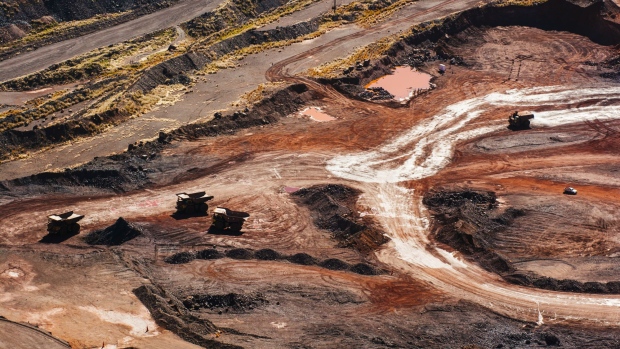 Dumper trucks operate in the iron ore excavation pit at the Sishen open cast mine, operated by Kumba Iron Ore Ltd., an iron ore-producing unit of Anglo American Plc, in Sishen, South Africa, on Tuesday, May 22, 2018. Kumba Iron Ore may diversify into other minerals such as manganese and coal as Africa’s top miner of the raw material seeks opportunities for growth and to shield its business from price swings. Photographer: Waldo Swiegers/Bloomberg , Bloomberg

(Bloomberg) -- Anglo American Plc said production across its operations will be lower than expected in the next couple of years, the latest big miner to warn on its ability to hit output goals.

While the largest miners continue to reap bumper profits from high commodity prices, the industry is also struggling to reach volume targets. Anglo’s operations have been hindered by everything from logistical issues and extreme weather to fallout from the pandemic.

Glencore Plc earlier this week lowered forecasts for 2023 on most of its commodities.

The industry’s inability to achieve output ambitions is exacerbating already tight supplies as the world struggles to adapt to Russia’s increasing exclusion from the global economy and disruptions from Covid-19.

Anglo said that’s its output of all commodities — with the exception of diamonds — will be lower next year than it have previously forecast, with lower expectations across the board for 2024.

Estimates for platinum group metals were hit especially hard, as production likely will be lower for the next three years, with total output falling as much as 12.5% by 2025 from this year’s already lowered target.

Anglo, which expects total production to grow 5% next year and again in 2024, also said costs will continue to rise as inflation hurts the industry. The company could take a writedown on a potash mine it’s developing in the north of England.