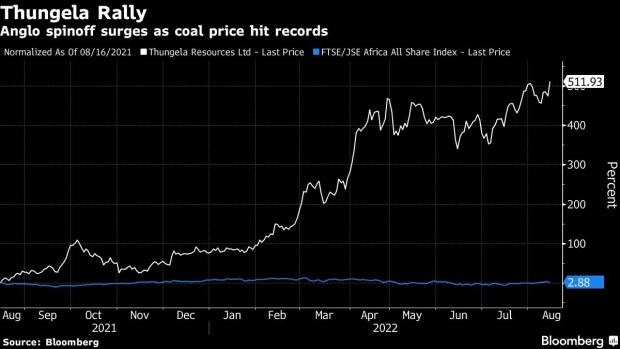 The Johannesburg coal producer shrugged off shipping disruptions to declare a hefty 60 rand per share dividend after posting record earnings in the six months through June. Chief Executive Officer July Ndlovu is now seeking more coal producing assets outside South Africa, where it’s being forced to curb exports due to limited rail capacity.

“We have looked at opportunities over the last nine months and we continue to look very carefully at some of those,” Ndlovu said in an interview. “There are some which we are studying and are quite excited about,” he said, declining to provide more details.

The coal spinoff from Anglo American Plc lowered its export guidance this year even as coal prices soared to records, because state-owned freight company Transnet SOC Ltd. is unable to move sufficient volumes by rail. South Africa’s railroad network is increasingly being hit by cable theft and a shortage of locomotives, forcing Thungela to cut production.

Transnet’s lines are critical for moving bulk commodities such as coal from South Africa’s vast coal fields in Mpumalanga to the east coast. With some routes hobbled, Thungela has started using trucks. The company cut its 2022 thermal-coal export forecast to between 13 million and 13.6 million tons, from an initial projection of 14 million to 15 million tons.

Thungela could have shipped more “if we had more rail capacity,” Ndlovu said. The coal producer may have suffered about 2.5 billion rand ($153 million) in lost business opportunities in the first half due to the rail constraints, according to Chief Financial Officer Deon Smith.

“Without doubt we would have made more money but as management our role is not to focus on what could have been, it’s to maximize what we’ve got,” Ndlovu said.

Thungela is stockpiling lower grade material and concentrating on shipping its highest quality coal due to the rail bottlenecks. Its also exploring exporting some coal via Mozambique’s Maputo to take advantage of the spike in demand from European utilities. Still, hauling coal by “rail remains the the most efficient, cost effective and most reliable way to get to port,” the CEO said.

Thungela shares jumped 2.5% by 11:15 a.m. in Johannesburg. The stock has more than tripled this year as demand for coal spikes amid Russia’s war in Ukraine.