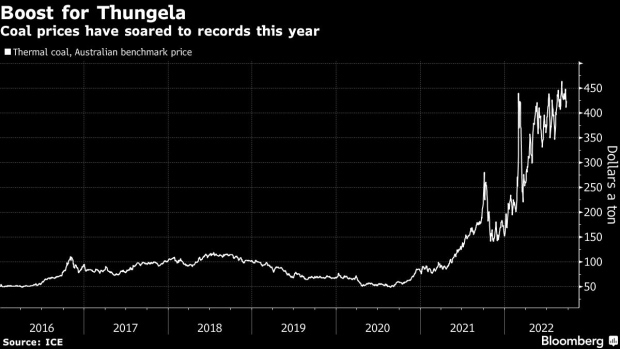 (Bloomberg) -- Thungela Resources Ltd. has soared more than 1,300% since the South African coal miner was carved out of Anglo American Plc last year. But despite this scorching rally, investors value the stock at a discount to worldwide peers, whose reserves of the fuel may last longer.

Thungela’s shares trade at about 1.8 times the company’s 12-month estimated earnings, compared with 7.4 times for stocks in the MSCI World Metals and Mining Index.

A European energy supply crunch worsened by Russia’s invasion of Ukraine has propelled coal prices to record highs this year, helping to make Thungela the best performer on Johannesburg’s stock market. Yet there are potential headwinds that may explain the restrained valuation -- the longer term outlook for its production volumes for one, as its mining deposits gradually become depleted, according to Coronation Fund Managers Ltd.

“Compared to other coal stocks, it has a relatively poor production profile,” said Nicholas Hops, head of South African equities at Coronation, which manages about 600 billion rand ($33 billion) as of end March. “Post initial public offering, they have identified life extension and other options to address this, but at the time of listing the production profile ran to near zero over a decade.”

Thungela’s operating costs also leave it more dependant on attractive export prices for its coal than some competitors. “The more operationally geared a commodity company is, the lower the P/E it tends to trade on versus peers,” Hops said.

In addition, its shipments are vulnerable to rail transport bottlenecks experienced by South African commodities exporters because of failings at state-owned network operator Transnet SOC Ltd.

Thungela’s share-price gains exceed 260% in 2022, compared to an advance of 29% for more diversified local rival Exxaro Resources Ltd., which trades at a ratio of 3.7 times and also produces iron ore. Strip out those operations and Exxaro, a lower cost business, has outperformed Thungela, Morgan Stanley analysts wrote in August.

Even so, the stock has defied skeptics following its June 2021 spinoff from Anglo American and the potential for heavier coal demand during the cold European months lying ahead provides scope for further gains.

Thungela remains “far too cheap,” even with its relatively short-life assets, said Ben Davis, a mining analyst at Liberum Capital Ltd. in London who has a buy rating on the stock. “Given the upside risks to energy prices over the winter period, we believe having coal and gas exposure in the portfolio is essential.”