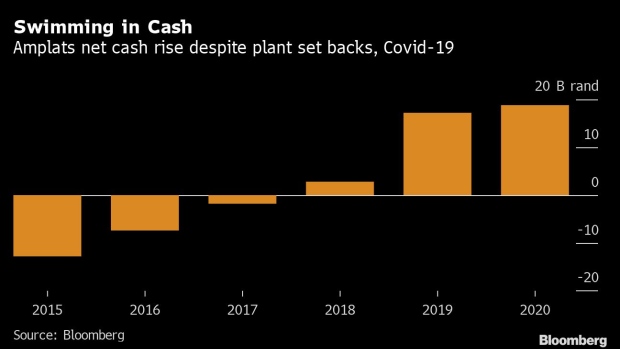 (Bloomberg) -- Anglo American Platinum Ltd. plans to increase its mine output by about a fifth over the coming decade, while seeking to stimulate demand for the platinum-group metals it produces.

Amplats, as the company is known, is targeting a 20% jump in production to about 3.6 million ounces by 2030 as it mechanizes mines in South Africa. That comes as investors debate the long-term outlook for PGM supply and demand, weighing the potential boost to platinum consumption from new hydrogen technologies against a shift to electric vehicles.

In the short term, tougher pollution regulations requiring vehicle makers to use more platinum in catalytic converters have helped boost the metal by 20% this year. Chief Executive Officer Natascha Viljoen expects prices to remain robust in 2021, even as Amplats sees the platinum market returning to a surplus.

“In terms of market balance, platinum is forecast to be in a small surplus in 2021,” the company said Monday in a statement. “The release of some of the build-up in Anglo American Platinum’s work-in-progress inventory and recovery in mine production are likely to exceed an expected improvement in autocatalyst, industrial and jewelry demand.”

Despite the pandemic and disruptions to its processing plants, the unit of Anglo American Plc posted record earnings before interest, taxes, depreciation and amortization last year as palladium and rhodium prices soared.