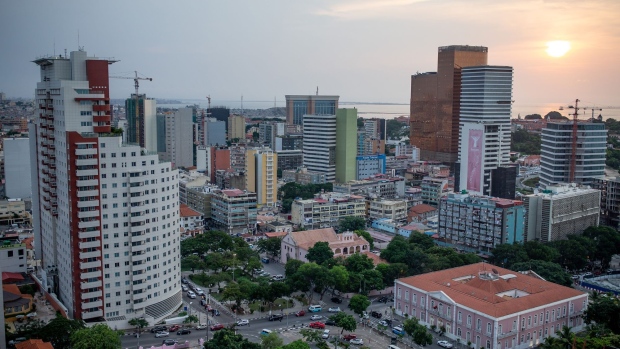 LUANDA, ANGOLA - JANUARY 30: A view of downtown Luanda as seen on January 30, 2020 in Luanda, Angola. Businesswoman Isabel dos Santos is the daughter of the former President of Angola - Jose Eduardo dos Santos. Forbes Magazine put her fortune at $2.1billion making her the richest woman in Africa. How she made her fortune has come under scrutiny as international media using information from the Luanda Leaks have revealed how, during his presidency, her father sanctioned her acquisition of stakes in Angolan industries including banking, diamonds, oil and telecoms. In December 2019 the Angolan Courts froze Dos Santos's stakes in Angolan companies as it brought a case against her regarding funds owed to the state oil firm. (Photo by Luke Dray/Getty Images) , Photographer: Luke Dray/Getty Images Europe

The sale of the nation’s 13th-largest bank by assets is part of a push by Africa’s second-biggest oil producer to raise cash and jump-start a moribund economy. Angola’s biggest-ever privatization program has so far resulted in the sale of 39 companies out of a total 195 assets earmarked for disposal by the end of 2022.

“This is the first privatization in the financial sector and its outcome will be very important to understand all those that follow,” Nunes Junior said in a written response to questions. Potential candidates to buy BCI will be selected this month to take part in a tender to buy 100% of its shares in one single block through the Luanda stock market, he said.The government will then attempt to sell stakes in banks including Banco BAI, the country’s biggest private lender by assets, and insurance company Empresa Nacional de Seguros de Angola, Nunes Junior said. The sale of stakes in state-run oil company Sonangol, diamond firm Endiama and national airline TAAG are slated for next year.

The government plans to sell as much as 30% of Sonangol, the economic engine of Angola’s oil-dependent economy. The stake is worth about $6.4 billion, according to Baltazar Miguel, a member of Sonangol’s board.

Nunes Junior, who’s in charge of reviving an economy that has been mired in recession for the past five years, expects a rebound in growth to help draw investors. Gross domestic product may expand about 1% this year on the back of higher oil prices and rising output from the non-oil sector, he said. Zero growth was forecast in the 2021 budget.“This economic growth forecast involves some risks,” said Nunes Junior, citing a possible decline in oil production due to Angola’s ageing oil fieldsand the negative impact of the Covid-19 pandemic on the sector. “Lack of rain in late 2020 and early 2021, which may negatively affect agricultural production, must be added to these risk factors.”Nunes Junior, 59, who holds a PhD in Public Finance from the University of York in the U.K., said President Joao Lourenco’s fight against corruption was a “new paradigm” that’s improving Angola’s image with investors. The changes that have been instigated will help build a real democratic state and a market-based economy that is able to diversify away from oil, he said.

“There’s a need to ensure that nobody is above the law,” said Nunes Junior. “We are aware that there is still a lot to do, but there is a Chinese proverb that says that a long journey begins with the first step. The first step has been taken and well taken.”

The minister also said Angola’s $4.5-billion program with the International Monetary Fund has helped the country carry out important reforms and increase transparency. He didn’t comment on the likelihood of Angola requiring a new IMF program after the current plan expires at the end of this year.

“Regarding Angola’s future relationship with the IMF after the conclusion of this program, it’s a subject that we will deal with and deepen in due time,” he said.