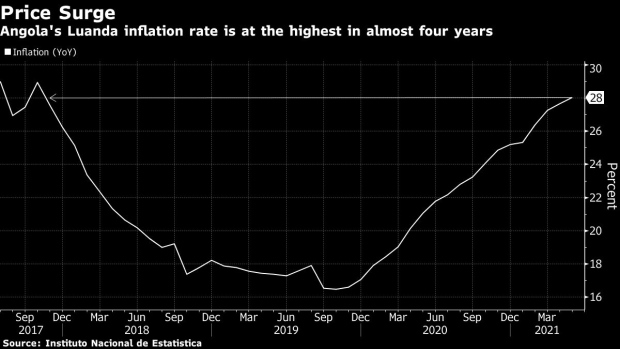 (Bloomberg) -- Angola’s central bank unexpectedly increased its benchmark interest rate for the first time in almost four years, a sign that it may be shifting focus to target inflation after lawmakers last Tuesday agreed to give it a price-stability mandate.

The monetary policy committee hiked the rate to 20% from 15.5%, Governor Jose de Lima Massano told reporters Friday in Luanda. The last time it raised the benchmark was in November 2017.

The measure aims to temper the inflation trajectory, Massano said. “The spread between inflation and the interest rate has been growing wider since the beginning of year,” he said. “Current data indicates additional inflationary pressures, which may put at risk the central bank’s inflation target of 19.5% for the end of the year."

Inflation in Luanda, the capital of Africa’s second largest oil producer was at a near four-year high of 28% in May.

The national inflation rate, while still high at 24.9%, has come down from December. The rate was at more than 40% late in 2016 and dropped below 20% in 2018, until the currency started weakening.

The tightening comes after lawmakers on June 22 agreed to amend the Constitution to boost the central bank’s independence by changing the way the governor is appointed and the mandate of the bank to focus on price stability and then financial stability.

The changes are still to be gazetted before they become law. Previously policy makers focused on money supply rather than lending rates to try curb inflation. That’s because a lot of the price pressures in Angola came from rising import costs following a depreciation of the kwanza, rather than demand.