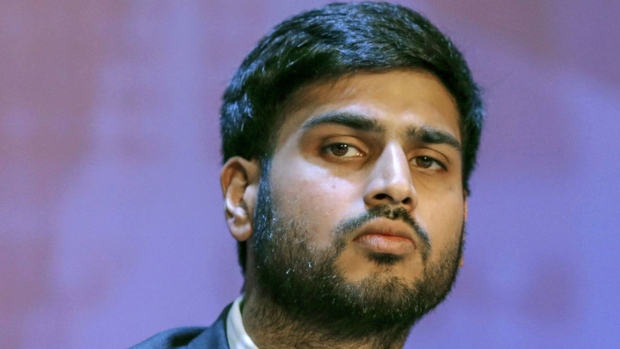 (Bloomberg) -- Anmol Ambani, the elder son of former billionaire Anil Ambani, lashed out against a new round of social restrictions in India, underscoring rising discontent among some businesses in a country that’s battling its worst-ever surge in coronavirus cases.

In a rare instance of a scion publicly criticizing government policies, the 29-year-old former executive director of Reliance Capital Ltd. let out a barrage of tweets lambasting the new semi-lockdown rules for disproportionately hurting smaller businesses and enriching larger ones.

“This is not about health. This is about control,” according to a Twitter post Tuesday from the son of the tycoon, some of whose businesses are in bankruptcy. “To control every aspect of your life.”

Barely emerging from a historic recession triggered by a months long lockdown last year, the $2.9 trillion economy is again facing a threat as cases surge past 100,000 on two days this week. In response, the state home to the financial hub of Mumbai imposed stringent rules, shutting all non-essential services through April. The nation’s capital New Delhi started night curfew, while other states have also tightened curbs.

The specter of another lockdown is now the biggest headwind for local businesses. “They destroy the very backbone of our society and economy, from the daily wage workers, self employed and SMEs to the restaurants and dhabas, fashions and clothing stores,” according to one of Anmol Ambani’s tweets.

Anmol is the nephew of billionaire Mukesh Ambani, Asia’s richest man who oversees a retail-to-refining conglomerate. Mukesh and Anil Ambani fell out soon after their father’s death in 2002, triggering a succession battle that led to the family businesses being split in 2005. The brothers reconciled in 2010.

The younger Ambani also said in his tweet that lockdowns worsen inequality. For instance, shutting down of brick-and-mortar stores benefits digital and e-commerce companies, he said.

India saw a rise in inequality in 2020 with the wealthiest people adding billions to their net worth while millions of Indians lost their jobs to the pandemic. Two of India’s richest men -- Mukesh Ambani and Gautam Adani -- were targeted in farmers’ protests earlier this year against new farm laws. Both billionaires denied any interest in entering agriculture.

“It’s no coincidence that the losses of the common man are gains of the wealthiest,” Anmol Ambani said, adding that lockdowns accelerate this “wealth transfer.”