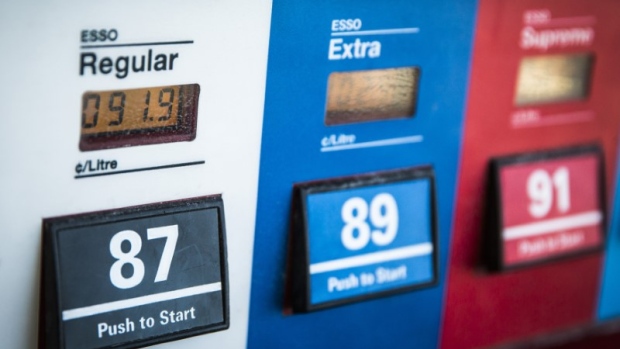 An Esso gas pump displays the price of fuel at 91.90 cents per litre in Richmond Hill, Ontario, January 30, 2015 , Reuters/Mark Blinch

OTTAWA -- The country's annual pace of inflation sped up to 2.2 per cent last month, its fastest pace in more than three years as the rate moved above the central bank's ideal bull's-eye of two per cent, Statistics Canada said Friday.

The agency's February data represented a significant boost to the inflation rate compared with the month before when it was 1.7 per cent.

The report also found the average of the agency's three measures of core inflation, designed to omit the noise of more-volatile items like gasoline, continued its upward momentum last month and has now climbed slightly above two per cent for the first time since February 2012.

Inflation is a central piece of the information for the Bank of Canada's interest-rate decisions and the stronger numbers translate into a hike sooner than experts have anticipated.

TD Bank senior economist James Marple said the recent "dovish tone" from the Bank of Canada on the interest rate will surely be challenged by the robust core inflation numbers.

"All told, today's data does create the risk that the Bank of Canada moves sooner, but with downside risks to the economic outlook still elevated, this summer remains most likely to see the next policy interest rate hike," Marple wrote.

Those risks include an uncertain global trade picture given U.S. President Donald Trump's penchant for imposing tariffs and the ongoing NAFTA renegotiations.

Statistics Canada's inflation report said the main driver that pushed up year-over-year consumer prices in February was the higher cost of gasoline, which rose 12.6 per cent, while pricier items like restaurant meals and passenger vehicle also had impacts.

Year-over-year prices climbed in every province in February compared with the year before, with the strongest acceleration in Atlantic Canada.

The last time the overall inflation reading reached 2.2 per cent was October 2014, just as the oil-price crash was getting underway.

The Bank of Canada aims to keep the headline inflation close to two per cent, the midpoint of its target range of one to three per cent. Interest rate increases are a tool the central bank can use to keep inflation from climbing too high.

Earlier this month, the bank predicted inflation would experience some fluctuations due to temporary factors such as gas and electricity prices as well as minimum-wage increases.

"Inflation is BAAAACK, but it's not yet a scary monster, being essentially in line with what the Bank of Canada actually wanted to see," CIBC chief economist Avery Shenfeld wrote in a report Friday.

Bank of Canada governor Stephen Poloz has hiked the benchmark interest rate three times since last summer, but he maintained the rate following a policy meeting earlier this month in order to buy more time to monitor trade-related uncertainties out of the United States.

At the time, the central bank reiterated that more interest rate hikes would likely be necessary over time. However, it said the governing council would proceed cautiously when considering future decisions and would be guided by incoming data, such as the economy's sensitivity to higher rates, the evolution of economic capacity and changes to wage growth and inflation.

The bank's next policy announcement is scheduled for April 18.

In a separate report Friday, Statistics Canada said retail sales increased 0.3 per cent in January to $49.9 billion, with the biggest increase coming from general merchandise stores. In comparison, retail trade fell 0.8 per cent in December to $49.6 billion.