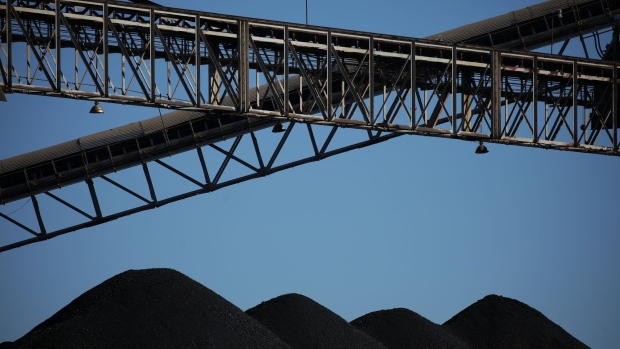 Conveyors belts run above a coal mound on the grounds of the Peabody Energy Francisco coal mine in Francisco, Indiana, U.S., on Thursday, Sept. 23, 2021. Coal is trading at sky-high levels, putting an industry benchmark on track to reach a record when it's published on Friday. Photographer: Luke Sharrett/Bloomberg , Bloomberg

(Bloomberg) -- CenterPoint Energy Inc. is delaying retirement of a coal-fired power plant in Indiana as a surge in wholesale electricity prices and uncertainty about some renewable projects undermines President Joe Biden’s push to decarbonize the grid.

CenterPoint plans to keep operating the 90-megawatt F.B. Culley 2 unit near the Ohio River until 2025, according to a meeting and presentation Thursday. Previously, the company had planned to shut the facility in 2023.

It’s just the latest move by US utilities to prolong the life of fossil-fuel assets to address uncertainty about the pace of transition to renewable energy sources. Earlier this year, NiSource Inc. said it would run two coal units an additional two years as a solar-trade probe spurred delays in renewable projects nationwide.

By prolonging the lifespan of Culley 2, CenterPoint can ensure local electricity supplies and avoid buying more expensive power from rivals. Indiana plants are reaping unprecedented windfalls this summer after power supplies were squeezed by a wave of shutdowns during the peak-demand period for electricity. CenterPoint spokeswoman Erin Merris confirmed the plan via email.

CenterPoint’s move is especially notable because it conflicts with a nationwide push to decarbonize the power sector. Just days ago, Biden signed the Inflation Reduction Act that dedicates $374 billion to accelerate the transition to clean energy such as solar arrays and wind farms.

A spokesperson for the regional grid operator didn’t immediately respond to a request seeking comment.