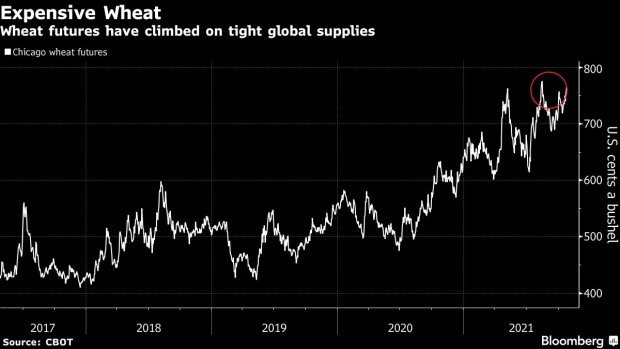 (Bloomberg) -- A third straight year of drought is forcing Iraq to cut its crop area in half, another example of how extreme weather caused by climate change is threatening food security around the world.

The nation expects to harvest a maximum 2.5 million tons of wheat next year, Agriculture Minister Mohammad Karim Al-Khafaji said in a TV interview on Friday. The Trade Ministry should consider the impact that will have on Iraq’s subsidized food program and need to secure extra supplies, he said.

Adverse weather has hurt harvests from North America to the Black Sea, helping to send benchmark wheat futures to a multiyear high. While Iraq itself isn’t among the largest buyers, the Middle East is the biggest importing region, and neighboring Turkey and Iran -- which Iraq depends on for river water supplies -- have emerged as key purchasers this season after droughts.

Oil-rich Iraq needs about 4 million to 4.5 million tons a year of wheat to subsidize bread for its people, though its total consumption is higher and the private sector can buy from abroad.

“We were surprised that the Water Resources Ministry only approved half of our proposed plan, saying they don’t have enough water reserves for the proposed lands,” Al-Nayef said by phone. The agriculture winter plan includes areas for wheat, barley and other crops.

Wheat growers across the Northern Hemisphere are in the midst of planting winter grain that will be harvested next summer. Dryness is expected to continue in the Middle East and North Africa through the end of the month, hampering early seeding, Commodity Weather Group said Friday.

Iraqi Water Resources Minister Mahdi Rashid Al-Hamdani said a lack of rain has also affected Turkey, Syria and Iran. That’s a problem because Iraq typically uses river water from Turkey, as well as some sub-rivers from Iran, for irrigation.

While Turkey is responding to requests for more water supplies, Iran has cut the amount flowing into its neighbor, and so Iraq’s Foreign Ministry plans to submit and international complaint regarding the issue, Al-Hamdani said.