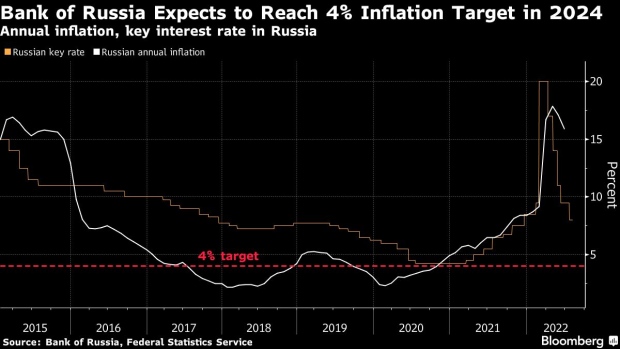 A worker picks a fresh lettuce for an order inside a Samokat dark grocery store in Moscow, Russia, on Tuesday, July 6, 2021. Samokat, Russia's biggest instant grocery-delivery service by orders, is aiming to be the first of its peers to take a share of the booming U.S. market. , Bloomberg

(Bloomberg) -- Russian inflation eased more than forecast to the lowest since President Vladimir Putin’s invasion of Ukraine, after consumer prices declined in consecutive weeks thanks to a stronger ruble and a seasonal drop in the cost of fruit and vegetables.

The third straight month of deceleration took annual inflation to 15.1% in July from 15.9% in June, the Federal Statistics Service said on Wednesday. The median forecast in a Bloomberg survey of 16 economists was for 15.3%.

On a monthly basis, prices dropped 0.39%, the most in five years. The cost of fruit and vegetables declined by double digits from June.

International sanctions aimed at crippling Russia’s economy initially led to a brief currency shock and supply disruptions. A wave of panic buying that followed drove up inflation to more than quadruple the central bank’s 4% target. Annual price growth peaked just two months after the invasion in February and started slowing down, curtailed by weak consumer demand and the ruble gains.

A sharp decline in prices for fruit and vegetables were a strong driver for inflation slowdown, the statistics agency said.

Russia’s disinflationary momentum has been so strong that the central bank was able to bring interest rates below their level before the war. Even deeper monetary stimulus is possible but likely in smaller steps, especially as new threats to prices start to emerge.

Fiscal policy might be one source of risk to inflation as the government boosts spending on anti-crisis measures and social programs. The budget surplus narrowed sharply to 482 billion rubles ($7.9 billion) in January-July, shrinking by nearly two-thirds from the first six months of the year, according to the Finance Ministry.

“With the recovery in demand outpacing supply, price pressure is set to revive and monthly inflation may accelerate again in October. The budget spending will aid that as well. This will bring a halt to the Bank of Russia’s easing in the fourth quarter.”

Given the weak state of consumption locally, declines in the ruble last month are having little impact on inflation, said Tatiana Orlova at Oxford Economics. “Retailers are wary of raising prices as demand for their goods has become more price-sensitive during the recession,” she said.

Last month, the Bank of Russia improved its inflation outlook and now anticipates prices will end the year at 12%-15%, down from its earlier prediction for 14%-17%. The ruble appreciated by nearly a quarter against the dollar in this year’s best performance globally, though it lost 13% in July.