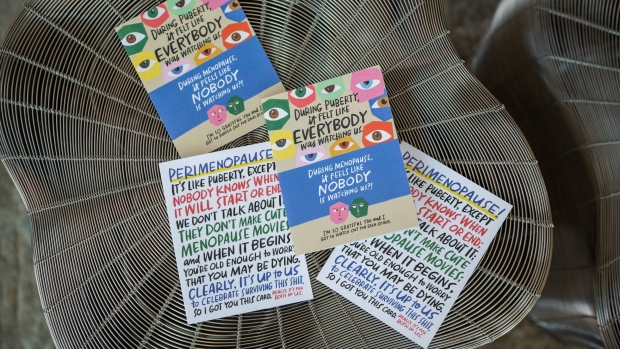 (Bloomberg) -- Nearly half of female workers between the ages of 40 and 55 have contemplated looking for remote jobs so they can more easily deal with menopause symptoms, a new survey finds.

In the survey commissioned by fertility benefits company Carrot, 47% of respondents said they would consider looking for remote or hybrid work because of menopause symptoms. Nearly a third of the women surveyed said they’d think about shifting to part time from full time work, while 22% said they’d consider retiring early.

Carrot surveyed 1,000 US female workers aged 40 to 55 that were either undergoing perimenopause or menopause, or had in the last five years.

Women between the ages of 45 and 54 make up 20% of the female workforce in the US. While many will experience the loss of sleep, mood swings, and hot flashes associated with menopause and perimenopause, very few workplaces offer support. Last year, a survey of 2,500 women from telehealth company Gennev found that 99% of women in this stage don’t get any menopause benefits at work. Almost a quarter of respondents to Carrot’s survey said they’d taken time off work because of their symptoms, but hid the reason from their employer.

Workplaces that don’t recognize the issue are at risk of losing talented senior women, said Carrot Chief Executive Officer Tammy Sun. “A lot of the most skilled and most valuable women who are leaders are in this group and the replacement costs for those leaders is much higher than average,” she said. Another survey out of the UK found 18% of women going through menopause are thinking about quitting their jobs altogether.

Read more: Women Are Leaving the Workforce for a Little-Talked-About Reason

Some governments and companies have started to recognize that this is an issue for their senior leaders. The UK government has a menopause taskforce and Japan has also begun to confront the issue. There’s very little discussion of how it hurts women in the workplace in the US.

(Updates with survey details in the fourth paragraph.)