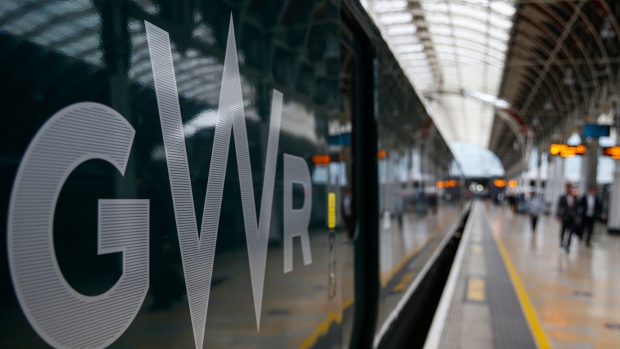 (Bloomberg) -- Another wave of strikes is set to disrupt Britain’s train network over the holiday season, after a union representing rail workers announced more industrial action in late December.

The National Union of Rail, Maritime and Transport Workers said late Monday that strikes would take place from 6 p.m. on Christmas Eve to around 6 a.m. on Dec. 27, adding to pressure on the government amid growing protests across swathes of the public sector.

The new dates add to an existing run of widespread train strikes scheduled for Dec. 13, 14, 16 and 17. However, an overtime ban planned between Dec. 18 and Jan. 2 has been canceled.

“We remain available for talks in order to resolve these issues but we will not bow to pressure from the employers and the government to the detriment of our members,” RMT general secretary Mick Lynch said in a statement. On Sunday, he rejected an offer of pay rises of 4% for both this year and next.

Unions provided one glimmer of hope, nonetheless, by putting a pay offer from Network Rail to their members. The RMT will ask workers to vote while recommending they reject the deal. The Transport Salaried Staffs’ Association, another labor group, is recommending that its members accept the deal.

No deal from train companies is being put to members, however, as union bosses hold out for more generous raises and better conditions.

Network Rail’s chief negotiator Tim Shoveller responded to the RMT’s choice to put their offer to a member vote, with a recommendation to reject it, by accusing the union of “playing fast and loose with people’s Christmas plans.”

“What use is a referendum that means that strike disruption is inevitable? At best it’s the tactic the RMT played in October by calling the strikes off at the last minute and causing immense disruption to passengers and vital freight routes.”

The UK government is facing mounting pressure in the run-up to the holiday season, with postal workers, nurses and teachers among those set to stage walkouts as wages fail to keep pace with the soaring cost of living. Prime Minister Rishi Sunak could deploy the military to help ease any disruption caused by public-sector strikes, according to Conservative Party Chairman Nadhim Zahawi.

“It’s incredibly disappointing that, despite a new and improved deal offering job security and a fair pay rise, the RMT is not only continuing with upcoming industrial action but has called more strikes over Christmas,” Transport Secretary Mark Harper said.

Earlier on Monday, the Unite labor group said workers on a train line that connects London to the west of England and parts of Wales will take further industrial action on Dec. 15. The TSSA, which met Transport Minister Huw Merriman on Monday, said it was not going to accept a pay offer from train companies but wanted to keep talks alive. The Rail Delivery Group is negotiating on behalf of the UK’s train operators.

“Responsibility for any disruption to Great Western’s passengers lies entirely at the door of the company,” said Unite regional officer John McGookin. “They can clearly afford to put forward a pay rise that reflects the cost of living but are refusing to do.”

Keir Starmer, leader of the opposition Labour Party, told Conservative ministers earlier Monday to “roll up your sleeves, get on the pitch” and help find a deal to avert transport chaos in the runup to Christmas.

(Updates with detail on Network Rail’s offer in sixth and seventh paragraphs.)