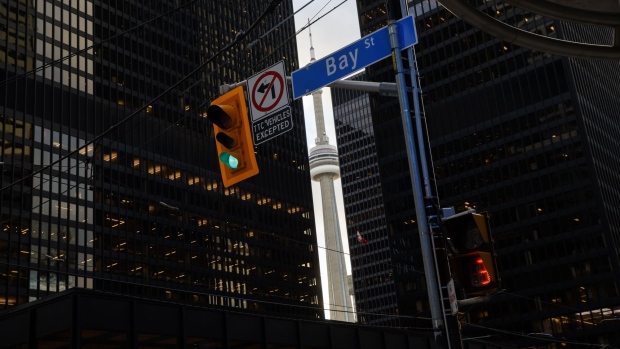 The CN Tower from Bay Street In the financial district in Toronto, Ontario, Canada, on Monday, Nov. 22, 2021. Many of Canada’s large financial firms say they have a growing portion of their workforces back in the office and the numbers are expected to swell in the New Year. , Bloomberg

Canada’s Anson Funds returned 45.5 per cent last year on the back of the meme stock frenzy, marking its second straight year of outsize gains.

“The last two years we’ve really had a benefit from this Robinhood and Reddit world,” Moez Kassam, the firm’s founder and chief investment officer, said in an interview.

Anson invested in small cap stocks amid rapid speculation, Kassam said. That strategy boosted assets under management to US$1.5 billion and helped the Anson Investments Master Fund return 44.5 per cent in 2020. By contrast, the Scotiabank Canadian Hedge Fund Index rose 6 per cent in 2020 and 16 per cent last year through November.

The firm, with offices in Toronto and Dallas, is among those involved in the U.S. Justice Department’s criminal investigation into short selling among hedge funds and research firms, Bloomberg reported in December. Kassam declined to comment on the matter.

Kassam, 41, said that among the meaningful contributors to his long-short fund’s 2021 return were stocks including Chinese technology company SOS Ltd. and Nova Scotia-based Meta Materials Inc. Another was Ocugen Inc., a U.S. pharmaceutical company, which Anson shorted.

These stocks have been among favorites with day-traders and among the most cited by Stocktwits, a social network for traders and investors.

Anson benefited from its investment in the SPAC that brought electric-vehicle startup Lucid Group Inc. public last year. The stock has soared more than 300 per cent since then. The fund’s biggest holding as of Sept. 30 was Pershing Square Tontine Holdings Ltd., the world’s largest SPAC. The company is trading below its US$20 offering price.

As for the meme stock trend driven by Robinhood customers and forums like Reddit, Kassam said that it has ebbed as retail investors have pulled back from once-popular trades.

“Retail is starting to playing defense,” he said. “Going long AMC, GameStop and the Ark ETF paid off handsomely in 2020 when market euphoria was at an all-time high. But that has now led to deep loses for anyone who has stayed a little too long.”