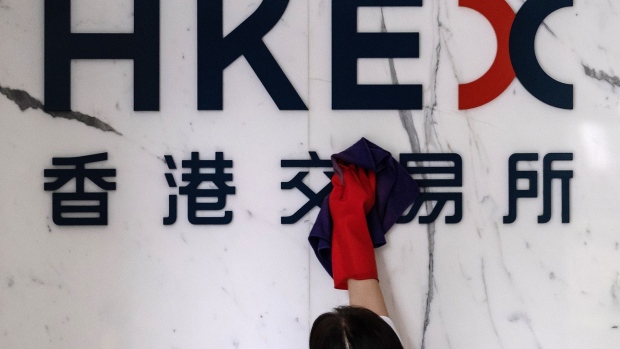 A worker cleans signage for Hong Kong Exchanges & Clearing Ltd. (HKEX) displayed at the Exchange Square complex in Hong Kong, China, on Wednesday, Aug. 19, 2020. HKEX posted a 1% gain in profit, benefiting from a spate of high-profile Chinese stock listings and a pick up in trading as the pandemic and political tensions stoked volatility. Photographer: Roy Liu/Bloomberg , Bloomberg

(Bloomberg) -- Beijing Ubox Technology & Trade Co., a Chinese intelligent vending machine maker, is weighing a Hong Kong initial public offering that could raise as much as $500 million, according to people familiar with the matter.

The company, which counts Ant Group Co. among its backers, is working with advisers on the prospective listing and is considering going public as soon as later this year, the people said, asked not to be identified as the information is private.

Ubox is also considering a pre-IPO funding round, though a final decision on the size hasn’t been made, the people said. The company is currently valued at about $1 billion, they said.

Deliberations are ongoing and details of the listing such as the size and timing could change, the people said. A representative for the company declined to comment.

Founded in 2011, the Beijing-based firm makes smart retail devices that incorporate technologies such as facial recognition and artificial intelligence, according to its website. In addition to vending machines that sell drinks, food and jewelry, the company also operates mini karaoke rooms. Ubox has over 100,000 machines placed in more than 300 cities across China and overseas.

The firm previously terminated a domestic IPO process in which it mandated CSC Financial Co. for a board transfer from the National Equities Exchange and Quotations, which hosts Chinese small-company stocks, to Shenzhen’s ChiNext market, according to a filing with the China Securities Regulatory Commission in March.