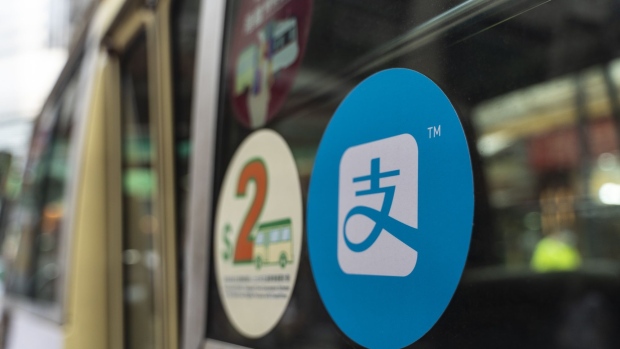 A sign for digital payment service Alipay by Ant Group, an affiliate of Alibaba Group Holding Ltd., is displayed on a public bus in Hong Kong, China, on Tuesday, Sept. 1, 2020. Billionaire Jack Ma's Ant Group is poised to pull off what could be the biggest initial public offering ever by simultaneously listing in Hong Kong and Shanghai. Photographer: Chan Long Hei/Bloomberg , Bloomberg

Demand for Hong Kong dollars hasn’t been this strong since before the global financial crisis, when the U.S. Federal Reserve flooded markets with liquidity.

Stock sales from Chinese megacaps such as Ant Group’s anticipated offering have drawn so much cash to Hong Kong that the city’s currency has remained near the strongest it’s allowed to trade against the greenback since April. This year’s inflows have forced the de facto central bank to sell local dollars, interventions that will have helped replenish the cash pool by about HK$280 billion (US$36 billion) by Wednesday. The record annual increase is more than 2008 and 2009 combined.

Back then, a credit squeeze globally forced Hong Kong’s businesses to repatriate funds to meet their liquidity needs, while the Fed’s quantitative easing program weakened the greenback. In March this year, Hong Kong dollar assets became more attractive versus the greenback after the Fed aggressively slashed rates to zero in the wake of the pandemic, a move that the Hong Kong Monetary Authority did not replicate.

Like in 2009, the currency’s strength has persisted because there’s so much investor interest in firms queuing up to list on Hong Kong’s stock exchange. Ant’s listing is expected to be so popular that Hong Kong brokers are offering mom-and-pop investors 20 times leverage to buy the shares, with only 5 per cent cash as a down payment.

Share sales in Hong Kong have raised a combined US$23.4 billion through late September, the third-most globally, according to a research note from accounting firm KPMG. The city has emerged as an alternative venue for overseas Chinese firms facing rising regulatory risks amid U.S-China tensions. JD.com Inc., NetEase Inc. and Yum China Holdings Inc. are among the U.S.-listed Chinese companies that have sought to list closer to home in Hong Kong this year.

Money is also pouring from across the border. Stock links with mainland exchanges -- the first of which didn’t exist until 2014 -- earlier this year was attracting a record pace of inflows from investors in Shanghai and Shenzhen.

The city’s dollar has been steadfast also because of its yield advantage over its U.S. counterpart. The Hong Kong dollar’s interest rate premium over the greenback was more than 100 basis points earlier this year -- the widest since 1999. Although the gap has shrunk significantly in recent months, borrowing in the U.S. currency to buy the Hong Kong dollar remains lucrative given the low interest rate environment in the U.S., said Tommy Ong, managing director for treasury and markets at DBS Hong Kong Ltd.

Hong Kong has pegged its currency to the greenback since 1983. In 2005 policy makers decided to keep the currency within a trading range between HK$7.75 to HK$7.85 per dollar. The HKMA intervenes when the dollar trades at one end or the other, either by buying or selling the city’s dollars.

Authorities have intervened 70 times this year to prevent the currency from strengthening past its permitted trading range with the U.S. dollar, including Monday’s HK$20.4 billion sale, the biggest since 2015. More interventions are to be expected if the Hong Kong dollar continues to hit the strong end of its trading band.

“It’s just the beginning of an up-cycle,” said ANZ’s Yeung. “I see the Hong Kong dollar’s strength persisting for a long period of time.” 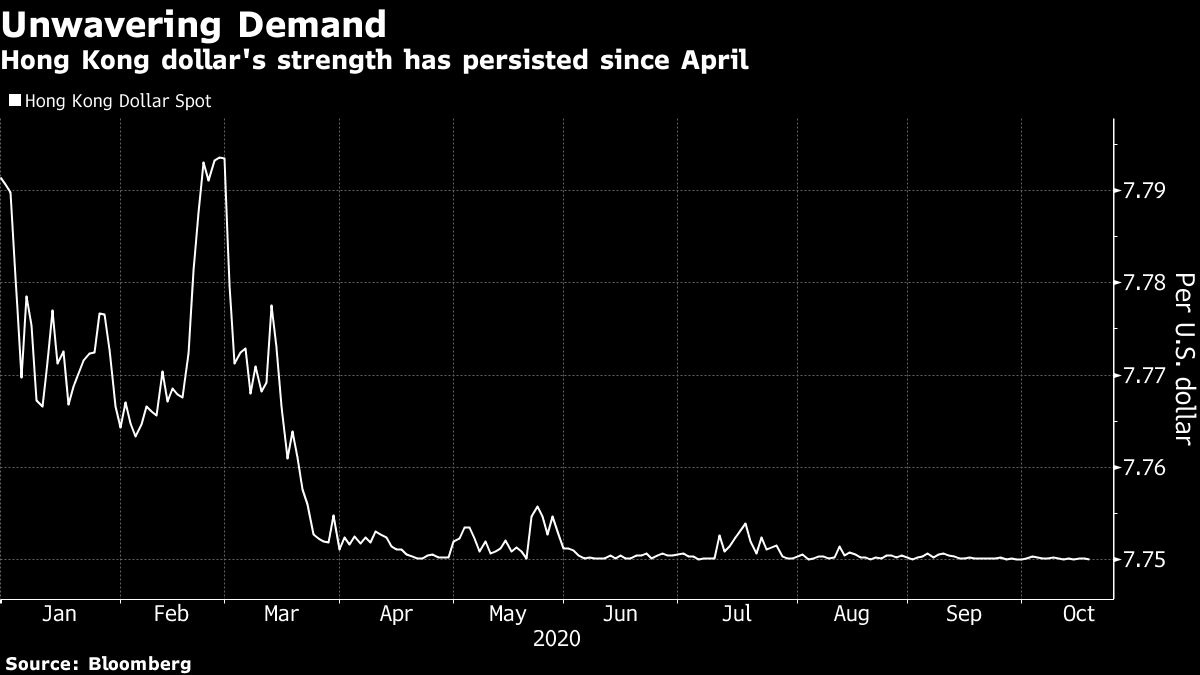