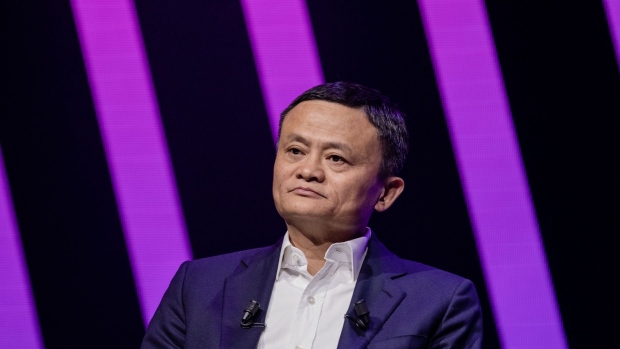 Jack Ma, chairman of Alibaba Group Holding Ltd., pauses during a fireside interview at the Viva Technology conference in Paris, France, on Thursday, May 16, 2019. Donald Trump’s latest offensive against China’s Huawei Technologies Co. puts Europe in an even bigger bind over which side to pick, but France's President Emmanuel Macron is holding the line. , Bloomberg

Even though staffers from Citigroup Inc., JPMorgan Chase & Co. and Morgan Stanley had just watched the deal of a lifetime vaporize -- along with $400 million in fees -- Ant’s team had a hopeful message: Don’t lose faith. Emblazoned on a big screen were the words: “Start from the Heart.”

A year later, with the registration for Ant’s $35 billion IPO set to officially expire Wednesday, the optimism from that gathering has faded away. Bankers say they’ve stopped getting regular communication from the firm, and some are doubtful that it will return to market before 2023. Lofty valuation estimates that once reached $300 billion have been cut by as much as two-thirds.

More broadly, the crackdown that started with Jack Ma’s fintech giant has snowballed into an assault on every corner of China’s technosphere as Beijing seeks to end the domination of a few heavy weights and create “common prosperity.” The question on everyone’s mind: when does it stop? If Ant is any indication, not for awhile.

“While the direction is clear for Ant’s remaking, implementation is fairly difficult,” said Dong Ximiao, chief researcher at Zhongguancun Internet Finance Institute. “For Ant and its investors, the uncertainty remains and the pain is not ending anytime soon.”

The forced overhaul of Ant runs deep. Its ubiquitous super-app Alipay, a one-stop shop for the financial needs of a billion users, is on the brink of being sliced up. Its treasure trove of consumer data is to be thrown open to rivals for a fee. In the halls of officialdom, there’s talk of potentially excluding its lucrative consumer lending arm from any future IPO. Employee morale has plummeted.

Some staff at the firm’s Hangzhou headquarters said Ant is beginning to resemble the traditional banks that founder Ma infamously derided as “pawnshops” at the Bund Summit in Shanghai a year ago. Anachronistic regulation, he warned, would suffocate innovation in China.

Regulatory compliance has become the priority at a fintech that once raced to out-innovate competitors at every juncture, one employee said. Another said some staff believe state ownership in the juggernaut may be the best solution. Authorities have discussed installing a government representative in Ant’s executive ranks to keep tabs on the company.

Bloomberg spoke with nine bankers, regulators and Ant staff for this story, all of whom requested anonymity discussing a sensitive matter. Officials at the company as well as the China Banking and Insurance Regulatory Commission and the China Securities Regulatory Commission didn’t respond to requests for comment. Citigroup, Morgan Stanley and JPMorgan declined to comment.

For now, executives are grappling with how to carve the sprawling fintech into separate ventures with state-backed partners, according to people familiar with the plans. While regulators led by the central bank have handed down broad guidelines, they’ve been short on details, leaving Ant to proceed by trial and error, the people said.

As part of the overhaul, Ant has already ramped up its capital base to 35 billion yuan ($5.4 billion) and is moving to build firewalls in an ecosystem that once allowed it to direct traffic from Alipay to services like wealth management, consumer lending and on-demand neighborhood services and delivery. Its profit slid 37% in the March quarter from the previous three months. Before the clampdown, Ant’s profit surged more than eight-fold in 2019. Net income in the first half of 2020 exceeded the previous year’s total.

Among initiatives Ant has made or planned:

The to-do list for Ant and rivals such as Tencent Holdings Ltd.’s fintech operations has been ever-expanding. Beijing’s focus has shifted from reining in their explosive online lending to more complicated tasks like reducing the dominance of their payments apps (which together control more than 90% of mobile transactions), opening up their platforms and ensuring consumer data is protected.

For starters, e-commerce giant Alibaba Group Holding Ltd. has started adding Tencent’s payment system to some of its apps, breaking the monopoly Alipay long enjoyed. Alipay and WeChat Pay have yet to open their ecosystems to rivals as regulators requested, while China’s central bank is encouraging consumers to adopt its own digital yuan.

The government has also proposed establishing a joint venture with local technology giants that would oversee the lucrative data they collect from hundreds of millions of consumers, people familiar said in March.

The myriad restrictions mean Ant is worth a fraction of its former self, according to some of its early Wall Street backers. Fidelity Investments slashed its valuation estimate for at least the second time this year to about $78 billion as of June 30. Others are more optimistic: BlackRock Inc. values the company at $174 billion and T Rowe Price Group Inc. at $189 billion. Ant fetched a $280 billion pre-money valuation before its IPO was halted.

“Ant Group’s business model risks collapse on a reported forced split-up from its Alipay and credit-product apps. Credit profit would more than halve, with group valuation plunging to $71.5 billion, we calculate.”

Chairman Eric Jing, who has also held the chief executive officer role since the sudden departure of Simon Hu in March, has promised that the company will eventually go public. Yet staff are losing hope that it can pull it off anytime soon.

A former employee in data who left recently said that his departure was one of many. Ant’s stock options are no longer enough to retain staff or attract new talent, people familiar said. Morale took an additional hit after Ant revamped its buyback program on employees’ existing restricted stock options, making it harder for them to cash out vested shares at an already diminished value, said the people.

To be sure, many employees have stuck around. Ant streamlined the promotion procedure for junior staff earlier this year, they said. The ever-widening crackdown on the tech sector has also deterred workers from jumping ship. Nearly every major player -- including Bytedance Ltd. and Didi Global Inc. -- traditionally seen as desirable employers, face scrutiny of their own.

Bankers who a year ago were betting the IPO would get done this year or next, now say 2023 is more likely. Regulatory hurdles remain. Several officials at the Shanghai Stock Exchange were probed for their role in Ant’s expedited sale process, according to two people familiar with the matter, as part of an inquiry into the IPO. And no regulator would dare green light a listing unless President Xi Jinping himself is on board.

For Ant, its investors and bankers, it all means more delays in getting their once-promising IPO off the ground.

You need to “get to a stage in which the government becomes very comfortable about the internet companies, and e-commerce behavior becomes very much like a state-owned entity,” Vincent Chan, China strategist at Aletheia Capital, said on Bloomberg Television. “It will be a very long way to go.”