Two months ago, global investors including Warburg Pincus, Carlyle, Temasek and GIC were on the cusp of a massive windfall from what would have been the world’s largest initial public offering.

Now, returns on the hundreds of millions of dollars they invested with Ant Group Co. are in jeopardy. On Sunday, China ordered Ant to reexamine its fintech businesses -- spanning from wealth management to consumer credit lending and insurance -- and return to its roots as a payments service.

While the central bank’s statement was short on specifics, it presents a serious threat to the growth and most lucrative operations of billionaire Jack Ma’s online finance empire. Regulators stopped short of asking directly for a breakup of the company, yet stressed it was important Ant “understand the necessity of overhauling its business” and told it to come up with a plan and timetable as soon as possible.

Authorities also berated Ant for sub-par corporate governance, disdain toward regulatory requirements, and engaging in regulatory arbitrage. The central bank said Ant used its dominance to exclude rivals, hurting the interests of its hundreds of millions of consumers.

Ant said in response that it will set up a special team to comply with regulators’ demands. It will maintain business operations for users, vowing not to increase prices for consumers and financial partners, while stepping up risk controls.

The Hangzhou-based firm needs to set up a separate financial holding company to comply with rules and ensure it has sufficient capital, regulators added. 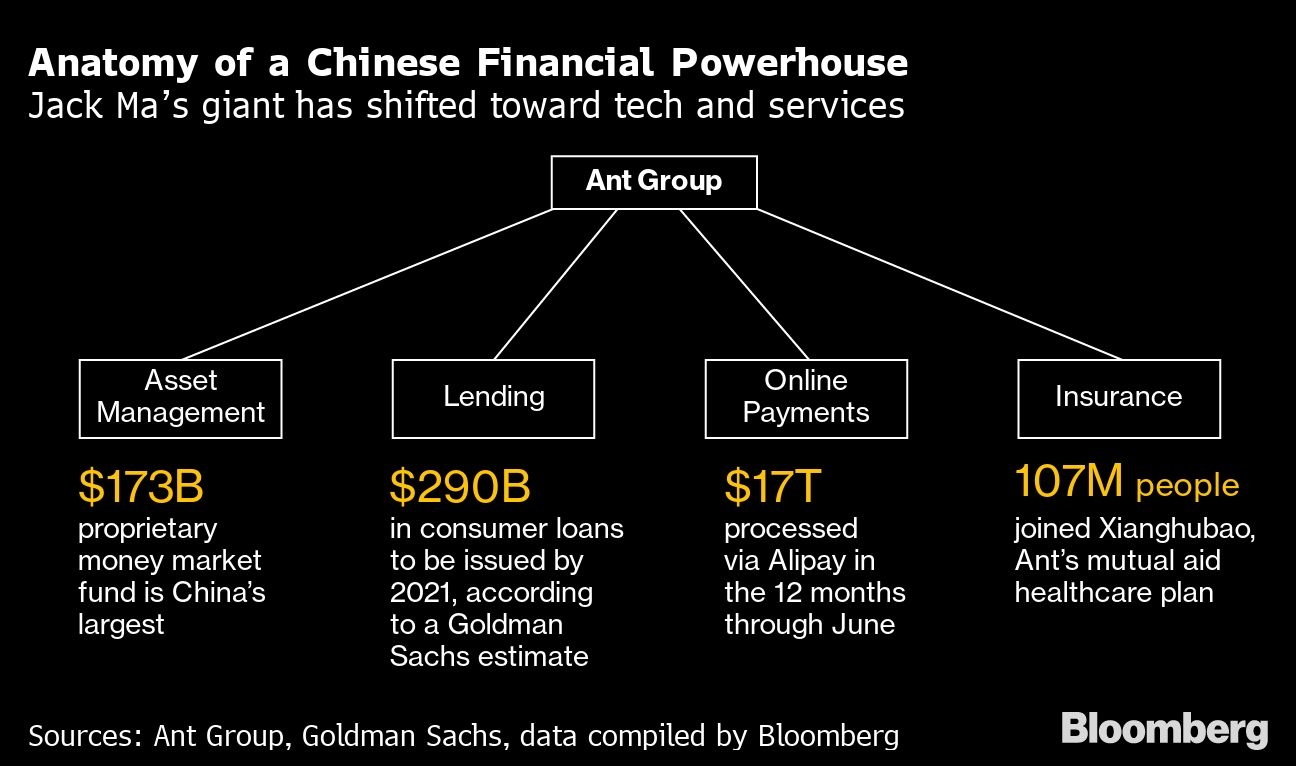 Here are some of the scenarios from investors and analysts on what the restructuring could look like:

Optimists say regulators are merely re-asserting their right to oversee the country’s financial sector, sending a warning to the internet companies without intentions of drastic change.

Beijing could be trying to make an example out of Ma’s Ant, the largest among a raft of new but pervasive fintech platforms. Past crackdowns of this nature have dealt short-term blows to companies, leaving them mostly unscathed. Social media giant Tencent Holdings Ltd., for instance, became a prominent target of a campaign to combat gaming addiction among children in 2018. While its shares took a hit, they eventually recovered to all-time highs.

Ant’s affiliate, Alibaba Group Holding Ltd., similarly regained the confidence of investors after short-run selloffs following accusations by authorities on everything from unfairly squeezing merchants to turning a blind eye to fakes on its e-commerce platform.

“I don’t think regulators are thinking of breaking up Ant, as no fintech company in China has a monopoly status,” said Zhang Kai, an analyst at market research firm Analysys Ltd. “The act is not just targeting Ant but also sending out a warning to other Chinese fintech companies.”

Some see it as an opportunity for Ant. With the industry as a whole facing tougher oversight, Ant has more resources to cope with the challenges as an industry leader, said Zhang.

A more troubling outcome would be if regulators moved to break up Ant Group. That would complicate the shareholder structure, and hurt the company’s fastest-growing businesses.

The global investors backed the company when it was valued at about US$150 billion in its last round of fundraising in 2018. A break-up would make the return on their investments uncertain, with the timeline for an IPO that was due in November now pushed into the distant future.

The government could ask Ant to spin off its more lucrative operations in wealth management, credit lending and insurance, offloading them into a financial holding company that will face tougher scrutiny.

Ant’s payments business alone leaves much less to the imagination. While the service handled US$17 trillion of transactions in one year, online payments have largely been loss-making. The two biggest mobile payments operators, Ant and Tencent, have heavily subsidized the businesses, using them as a gateway to win over users. To make money, they leveraged the payments services to cross sell products including wealth management and credit lending.

“Ant’s growth potential will be capped with the focus back onto its payments services,” said Chen Shujin, a Hong Kong-based head of China financial research at Jefferies Financial Group Inc. “On the mainland, the online payments industry is saturated and Ant’s market share pretty much reached its limit.”

The worst case scenario would be for Ant to forgo its money management, credit and insurance businesses, halting its operations in the units that service half a billion people.

Its wealth management business which includes the Yu’ebao platform that sells mutual funds and money market funds, accounted for 15 per cent of revenue.

Credit tech, which includes Ant’s Huabei and Jiebei units, was the biggest revenue driver for the group, contributing 39 per cent of the total in the first six months this year. It made loans to about 500 million people.

That outcome would be underpinned by the idea that China’s leaders have grown frustrated with the swagger of tech billionaires and want to teach them a lesson by killing off their businesses -- even if it means short-term pain for the economy and markets.

China’s private sector has maintained a delicate relationship with the Communist Party for decades, and has only recently been recognized as central to the nation’s future. Many commentators have attributed the recent crackdown on fintech companies to remarks Ma made at a conference in October, when he decried attempts to rein in the burgeoning field as short-sighted and outmoded.

Between them, Alibaba, Ant and Tencent commanded a combined market capitalization of nearly US$2 trillion in November, surpassing state-owned behemoths such as Industrial & Commercial Bank of China Ltd. as the country’s most valuable companies.

Alibaba said on Monday it would increase its share buyback to US$10 billion from US$6 billion. The company’s board authorized the increased program, effective for two years through the end of 2022. It shed more than US$200 billion in market value since November, when regulators halted Ant’s IPO.

Alibaba fell as much as 5.1 per cent in Hong Kong trading on Monday, to the lowest since July.

The trio have invested billions of dollars in hundreds of up-and-coming mobile and internet companies, gaining kingmaker status in the world’s largest smartphone and internet market by users. 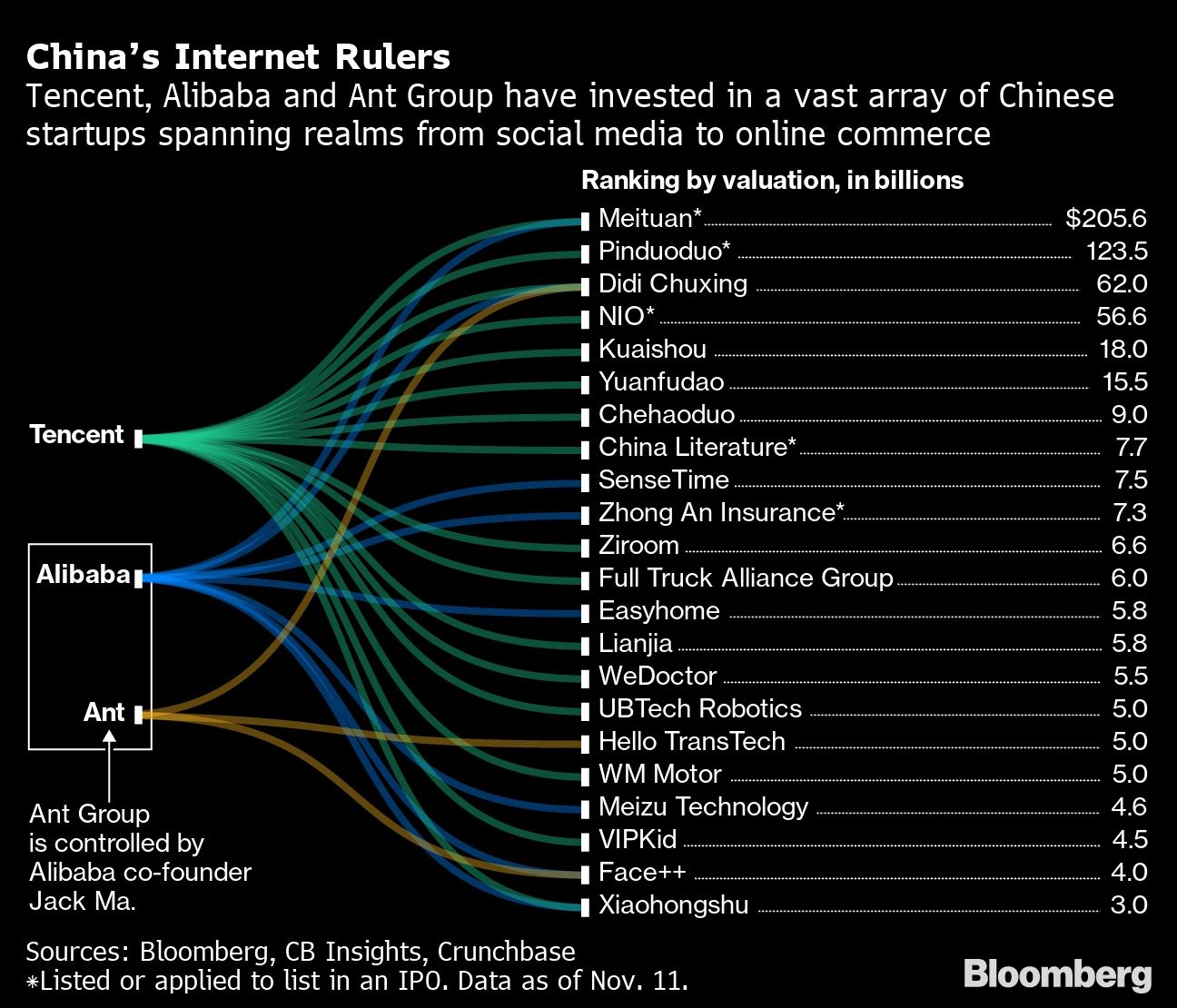 “The Communist Party is the end-all and the be-all in China. It controls everything,” said Alex Capri, a Singapore-based research fellow at the Hinrich Foundation. “There is nothing that the Chinese Communist Party doesn’t control and anything that does appear to be gyrating out of its orbit in any way is going to get pulled back very quickly,” he said, adding “we can expect to see more of that.”

--With assistance from Colum Murphy.