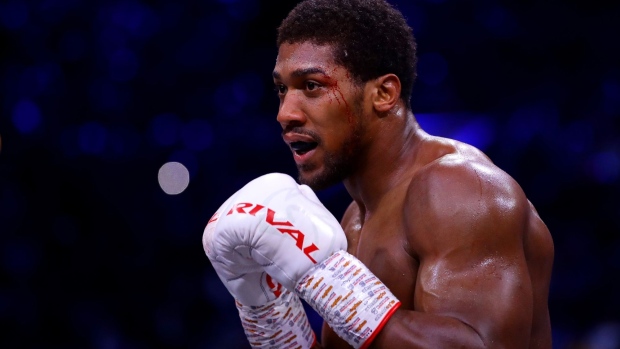 (Bloomberg) -- The dearth of sports on the planet means broadcasters are not airing matches subscribers have paid to see. This has put billions of dollars in broadcast fees at risk and could mean financial ruin for some athletes and teams.

British boxing promoter Eddie Hearn is trying to find a solution. He has a $1 billion deal with sports streaming company DAZN to air his fights, and has an Anthony Joshua match to be held in London on June 20. He thinks this could be postponed, and the solution could be to hold the match somewhere else.

“Our absolute priority is for him to fight in the U.K.,” Hearn said. “But if we couldn’t get what we want in the U.K. then we could go to the U.S., the Far East or anywhere.”

It sounds impossible, given the restrictions on movement that are in place in many countries. But in regions that are virtually free of the virus, officials might think they can manage the contagion risk from inviting foreign players so they can safely stage events. And they’d want to do this, if before the pandemic they were in the midst of a push to boost their international credibility as a sporting destination.

The potential for geographical arbitrage may hold the most potential for sports like boxing, tennis and golf. Their events involve far fewer participants and support staff than, say, soccer, so the testing and quarantining that would inevitably be required to move matches to other areas of the world wouldn’t be as onerous.

Hearn, who staged an Anthony Joshua fight in Saudi Arabia in December, didn’t say what regions he’s considering for the June bout or the other 40 contests on his 2020 schedule. The kingdom has hosted elite soccer from Spain and Italy already this year and has made clear its desire to host more international sports, as have its neighbors in Dubai, which has staged international golf, tennis and rugby for decades, and Bahrain, which has Formula One auto racing.

The financial strains from canceled matches mean there’s good reason for athletes, teams and organizers to start thinking about relocation to complete as much of their schedule as possible, Hearn said.

“Of course there are opportunities with esports, fitness programs and fighting behind closed doors but we want to return to live sports as soon as possible,” he said.

DAZN, owned by billionaire Len Blavatnik, has an eight-year contract to air Hearn’s matches and a lot of reasons to make sure they happen -- the London-based company has 8 million subscribers, many of whom can cancel at a month’s notice. The service is available in nine territories, and the virus has already forced it to delay plans for a global expansion originally planned for May until September, according to a person familiar with the matter.

Like Hearn, Formula One is looking around the globe to salvage its season. The auto race, owned by billionaire John Malone’s Liberty Media, has tracks from China to Canada and could overhaul its schedule to ensure the first races go ahead in regions that are less affected by the virus.

Chief Executive Officer Chase Carey said Monday the 2020 schedule will be “significantly” different from what was originally planned, and that F1 expects “clearer insights to the situation in each of our host countries, as well as the issues related to travel to these countries, in the coming month.”

This isn’t to say changing schedule is straightforward: rearranging the circuit requires flying hundreds of team crews and broadcasters around the world. The program is carefully ordered to avoid conflicts with other events and suit local weather conditions --- for example, Montreal is only suitable for racing in the months when it’s not frozen over.

Even so, F1 has taken a step to move things around. Its teams have waived their right to veto calendar changes, giving management a free hand to restructure the season, according to a person familiar with the discussions.

Doing this makes it more likely its finances can weather the pandemic. F1 made $632 million for screening rights for last year’s races, according to company filings -- more than a third of its total revenue. The current season will have 15 to 18 races, down from 22 originally planned, but as long as it delivers at least 15, the fee it receives from broadcasters will be the same. If F1 runs fewer than 15 races, broadcasters can lower payments according to a sliding scale based on the number of canceled events.

As for Europe’s most popular sport, soccer, there are even suggestions that it could move abroad if the continent stays in lockdown for months.

Some leagues could salvage their season by relocating to perhaps Saudi Arabia or, even, China, said Simon Chadwick, professor of Eurasian Sport at Em-Lyon Business School in Paris.

China wants to become a leading FIFA nation by 2050, he said. Staging European matches could help it realize that ambition sooner rather than later.

There are clearly a vast range of reasons for this not to happen soon. But if some regions come out of lockdown, and players can be tested and quarantined, the appetite among officials to stage European football could become be an important driver to saving teams’ seasons.

“Assisting the global football community could either be a power play or an act of selflessness,” he said. “However, it would position the country at the heart of the world game and as being a guardian of its well being.”