A new ETF designed to bet directly against Cathie Wood’s flagship fund comes not a moment too soon for her growing band of skeptics.

All eight of the exchange-traded funds at Wood’s Ark Investment Management dropped in July and almost all have seen net outflows, with a day’s data still to be gathered.

With a clutch of speculative tech stocks including Spotify Technology SA falling out of market favor, the US$22.5 billion ARK Innovation ETF (ticker ARKK) is now trading in the red for the year. It’s a reversal from the standout performance in 2020 that earned Wood both fame and a mountain of assets.

Now ARKK is the target of the Short ARKK ETF (SARK) that will deliver the daily inverse performance of the famous fund, according to a Friday filing to the U.S. Securities and Exchange Commission. 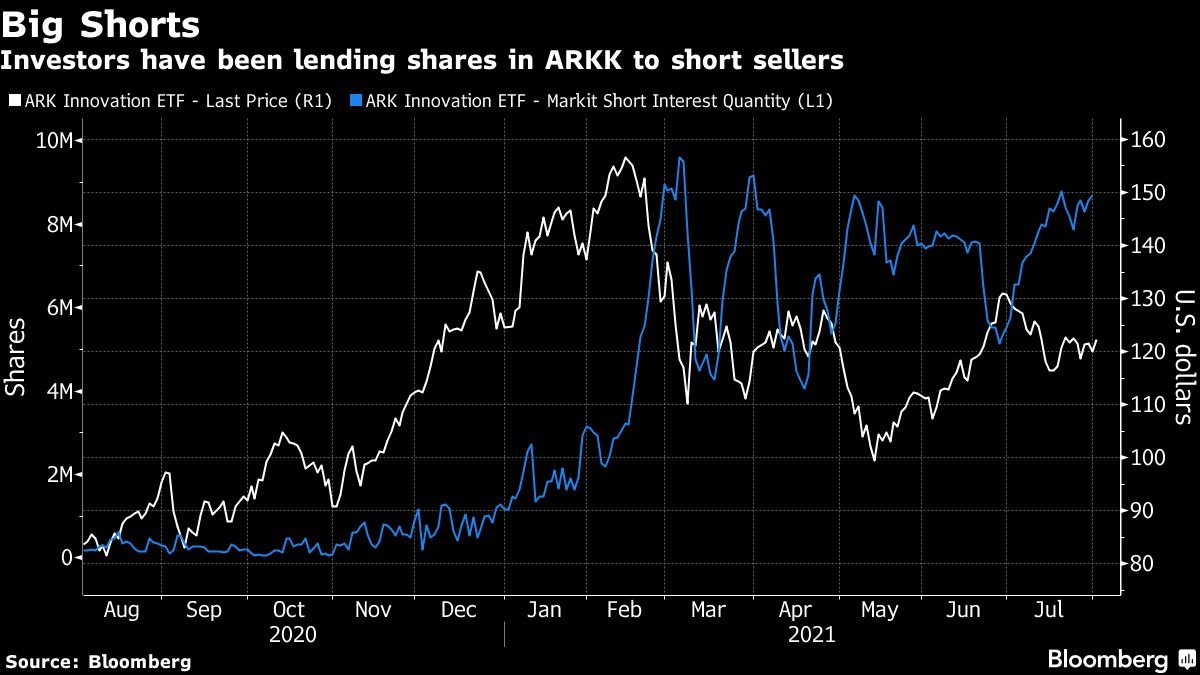 Wood has made plenty of fans with her high-conviction bets on cutting-edge companies -- but plenty of detractors too.

“Cathie Wood’s stellar performance over the past several years has not only been a magnet for bullish investors, but also for permabears,” said Nate Geraci, president of the ETF Store. “There’s always a cohort of investors wanting to bet against winners, with the simple assumption that the winning can’t last forever.”

A spokesperson for Ark didn’t immediately respond to a request for comment.

ARKK was among the best-performing ETFs in the U.S. last year, returning 149 per cent to make a star out of Wood and lure billions of dollars. Both performance and flows have faltered in 2021.

While inverse funds are common enough in the US$6.6 trillion U.S. ETF industry, SARK stands out for its focus on a single manager. Most inverse funds bet against major stock indexes, and while those have gathered millions in assets, the Short ARKK ETF has serious blockbuster potential. About 8.7 million shares of ARKK are on loan to short sellers at present, worth more than US$1 billion, according to data from IHS Markit Ltd.

The ETF will make it easier for retail investors to bet against ARKK, but will also expose them to the usual risks of such products. Because they reset their leverage daily, the instruments can veer from their intended objectives if held for longer than a day. The filing is explicit on this point, saying the aim is to achieve an inverse return “for a single day, not for any other period.”

As Wood has become a famous fund manager -- in South Korea they have nicknamed her “Money Tree” -- she has attracted opprobrium as well as inflows. Critics say her thematic approach, which relies on trends like robotics or space travel, is merely surfing the whims of the retail investing crowd. The billions she has garnered are deployed into a relatively small batch of companies, some of which have yet to deliver any profits.

Matt Tuttle, chief executive officer at Tuttle Capital Management LLC, will manage SARK. He said the creation of the fund is about providing a tool investors want, and that the firm is an admirer of Ark and of Wood.

“The bigger risk in this fund isn’t the mechanics, it’s doubting Cathie Wood,” said Eric Balchunas, senior ETF analyst for Bloomberg Intelligence. “I called them Raiders of the Lost Ark and the metaphor is so apt -- just when they think they’ve got Indiana Jones in a cellar full of snakes, he gets out.”