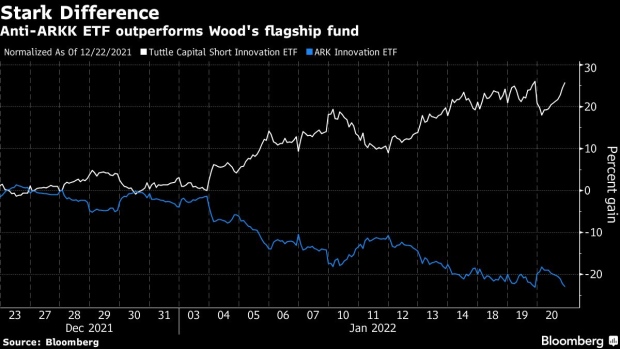 (Bloomberg) -- A controversial ETF with a singular mission to exploit weakness in Cathie Wood’s flagship fund has now amassed $234 million in assets as the new year rout in richly priced tech stocks deepens.

After a low-key start, the Tuttle Capital Short Innovation ETF (ticker SARK) now boasts an impressive haul for a fund less than three months old after soaring about 50% since inception, according to data compiled by Bloomberg.

SARK seeks to win when the ARK Innovation ETF (ARKK) loses, using swap contracts to short the fund. The Tuttle product has won a slew of fans in the tech wreck, posting positive inflows for 10 trading days running.

While inverse funds are common enough in the $6.9 trillion U.S. ETF industry, SARK stands out for its focus on a single manager.

Its low-profile but sustained rally suggests more traders are finally prepared to bet against Wood. Even as ARKK’s famed outperformance against the S&P 500 evaporates, investors have proved intensely loyal with modest outflows.

“I’m honestly not surprised at it just taking in money,” said James Seyffart, Bloomberg Intelligence ETF analyst. “The trend is your friend and for ARK right now the trend is still negative.”

The jump in Treasury yields and an expectation of tighter monetary policy have weighed on many of the stocks favored by Wood and ARK. ARKK plunged 20% this year through Thursday, while SARK was up 22%.

Matthew Tuttle, chief executive officer of Tuttle Capital Management LLC, noted that SARK has recently been notching inflows even on days when ARKK climbs. To Tuttle, it’s a sign investors increasingly see the fund as a hedging tool or a wager on the macro environment -- not just a way to capitalize on the downward momentum of speculative equities touted by Wood and her team.

“I do think inflows can continue, regardless of how ARKK does from here,” he said by email.