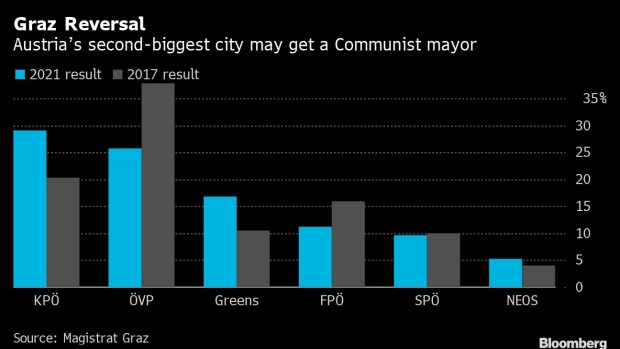 The Communist Party, which hasn’t had a parliamentary representation at the federal level since 1959, is set to unseat the center-right mayor in Graz, Austria’s second-largest city.

Elke Kahr received more than 29% of votes, according to partial results. That compares with 26% for the incumbent mayor from Chancellor Sebastian Kurz’s People’s Party, a 12 percentage-point drop compared with its previous election tally in 2017.

The People’s Party managed to hold on to its control of Upper Austria with about 38% support, almost double its closest rival, according to preliminary results.

The biggest surprise came from People, Freedom, Fundamental Rights, a small party which was founded earlier this year and questions Covid jabs. MFG, as it’s known by its German abbreviation, is set to win about 6%, giving it three seats in the legislature for the region with Austria’s lowest vaccination rate.