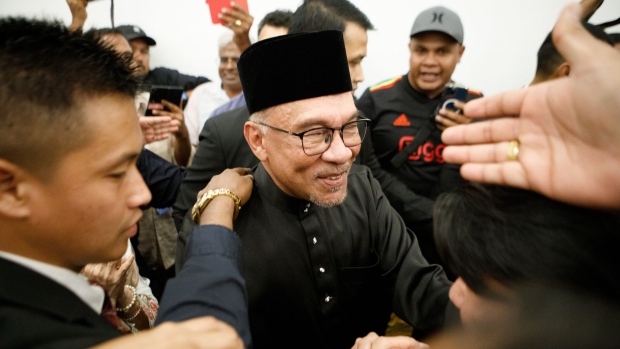 (Bloomberg) -- Malaysian Prime Minister Anwar Ibrahim appointed himself as finance minister, betting he’s the best person to sustain the country’s fragile post-pandemic recovery as the economy heads for a slowdown next year.

“I want to begin a new approach” and give local business people and foreign investors confidence in the economy, Anwar, 75, told reporters after announcing the cabinet lineup on Friday.

Anwar was picked as premier by the king last month after the country’s first-ever hung parliament led to days of political deadlock. His move to also take the finance minister post, which isn’t unusual in the Southeast Asian nation, may also help him consolidate power and prevent infighting among the diverse groups in his so-called unity government.

Anwar’s immediate challenge will be to present a budget to steer the economy through the pressures of lingering inflation, a weak currency and an unfavorable global economic environment. A reformist who heads a multiracial coalition, Anwar has made protecting low and middle-income groups from rising prices the top priority of his administration.

His government will face “public pressure to use subsidies to contain the rising cost of living,” which will be an obstacle to fiscal consolidation, Fitch Ratings analysts led by Kathleen Chen wrote in a note.

Malaysia’s economic growth is projected to slow to 4%-5% in 2023 from an estimate of more than 7% this year, according to the country’s central bank. That would come after a rapid, reopening-driven rebound in 2022, which saw gross domestic product jump by 14.2% in the July-September quarter from a year earlier, the fastest pace in more than a year.

The anticipated slowdown may prompt Anwar’s government to continue with subsidies that are projected to a reach a record $18 billion in 2022, delaying its plan to reduce the budget deficit and rein in public debt.

Anwar was following in the footsteps of his predecessors Najib Razak and Mahathir Mohamad who took charge of the state finances during the end of their reigns. He previously held the role in Mahathir’s cabinet for seven years and got fired at the height of the 1998 financial crisis after a falling out with his boss over the economy, in particular foreign exchange and capital controls.

Mahathir at the time wanted a low interest rate environment with more spending while Anwar advocated a tighter monetary policy with austerity measures.

Anwar said Sunday that his administration would review the blanket subsidies that are currently enjoyed by the rich as well as businesses, instead of being funneled to the most needy. Still, any shift is likely to be gradual, given that the measures have helped to contain inflation and that Anwar has promised to boost spending on areas including health care and infrastructure, Fitch said.

Economic challenges aside, Anwar must also balance the interests of lawmakers cobbled together from at least four political groups that support his unity government. The prime minister has said he will show that his alliance commands a majority by holding a confidence vote when parliament convenes on Dec. 19.

Anwar’s Pakatan Harapan won 82 seats in the general election, the most of any coalition but not enough to form a majority. He then secured pledges of support from multiple key political alliances, including the former ruling bloc Barisan Nasional, which he says gives him enough votes for a two-thirds majority.

But the government’s position remains fragile, according to Fitch.

“While the different political parties could throw their support to the new government, it is not clear how big this support is,” it said.