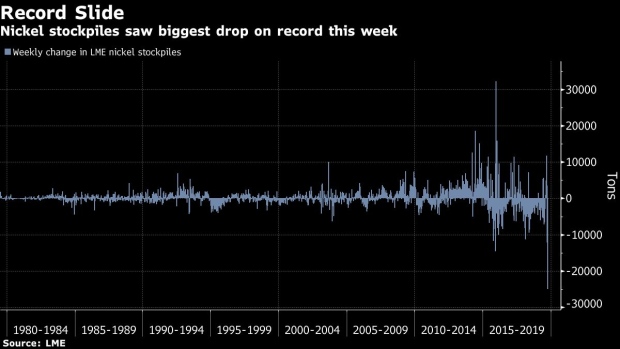 (Bloomberg) -- The nickel market is being roiled by Indonesia’s impending ban on ore exports and traders are rushing to withdraw as much metal as possible.

Inventories tracked by the London Metal Exchange posted a record decline for a second straight day, adding fuel to a rally that’s put prices on course for their biggest annual gain since 2006.

Stockpiles of the metal -- a key ingredient in alloys like stainless steel -- are now at the lowest level since 2012. It’s the latest sign that supply shockwaves are reverberating through the global market ahead of Indonesia’s ban, due to start in January.

The decline in inventories has come amid intense bidding for short-dated contracts on the LME that’s caused nickel’s forward curve to invert, with spot contracts trading near the biggest premium to three-month futures since 2007. That condition, known as a backwardation, is seen in the industry as a hallmark feature of a supply shortage.

Most other industrial metals have dropped this year because of mounting concerns over demand as factory activity across Asia, Europe and the U.S. enters a sharp contraction.

Other metals were mixed. Copper declined 0.6% to $5,629.50 a ton in London, after falling as much as 1%, as investors digested a mixed U.S. jobs report for September. Zinc, aluminum and lead traded higher and tin was unchanged.

--With assistance from Elena Mazneva and Yvonne Yue Li.

To contact the reporter on this story: Mark Burton in London at mburton51@bloomberg.net

To contact the editors responsible for this story: Lynn Thomasson at lthomasson@bloomberg.net, ;Luzi Ann Javier at ljavier@bloomberg.net, Steven Frank