Canadians are so alarmed by the red-hot housing market that many say they’d like to see the central bank raise the cost of borrowing to dampen demand for real estate and stabilize prices.

About 70 per cent of Canadians responding to a new Nanos Research poll conducted for Bloomberg News said the sharp increase in home prices was a major problem for the economy. Almost half were at least somewhat in favor of the Bank of Canada raising its overnight rate to slow the rise, even though such a move would also increase the cost of credit lines, credit cards and other debt.

The numbers underscore how soaring housing costs have emerged as a major issue in the public consciousness after a year in which prices jumped by 30 per cent or more in some regions. Economists at major banks have called on the government to act to reduce demand. At the same time, the Bank of Canada has made it clear it won’t raise rates until the economy absorbs its excess capacity -- a milestone projected for 2022 at the earliest. 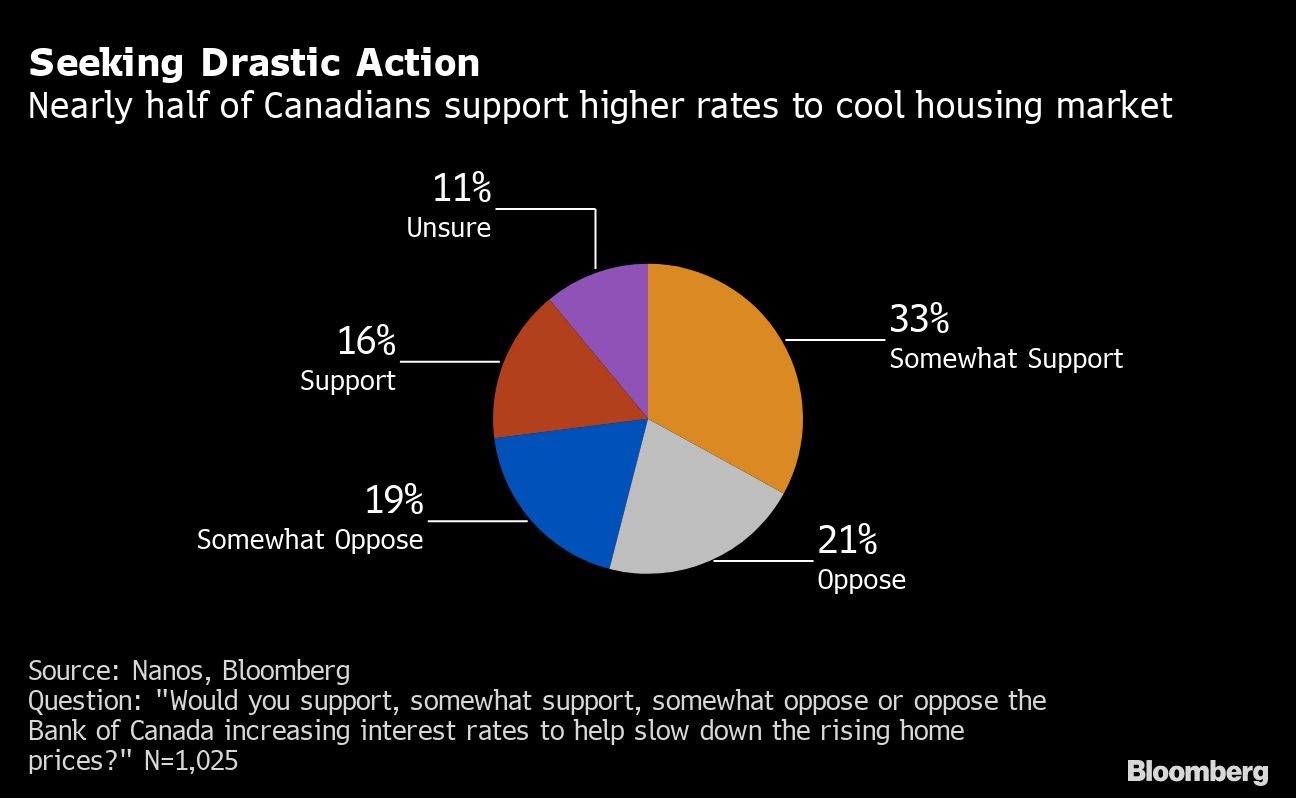 “Even though there is no consensus, the fact that one in two Canadians are good with a rate hike speaks to the appetite to cool down a hot housing market,” pollster Nik Nanos said.

Those sentiments are prompting some anxiety for Canadians -- including some homeowners whose own fortunes are rising with the real estate market.

“I own a place, but I also have a son too. When I think about my son, it’s like, how is he going to survive in this world?” said Raymond Wong, a Vancouver engineer who filed a petition with Canada’s parliament saying the central bank should consider house prices when setting interest rates. “He can do everything right, do everything by the book, get an education, but at the end of the day he won’t be able to afford anything.”

The Bank of Canada’s long-standing position has been that it should be the last line of defense against threats to financial stability, as its focus is on other priorities, like maintaining healthy inflation and output growth.

Most economists say it’s still too early in the recovery for the central bank to hike rates, and it’s not clear that the survey respondents who favored raising rates took full account of the broader effect of higher borrowing costs.

Still, Canadians’ growing alarm at the recent surge in home values could present a political problem for Prime Minister Justin Trudeau. The government has options other than raising interest rates to slow the housing market, like taxes and regulation, but has refrained from using them for fear of angering homeowners.

The widening gulf between Canadians with property and those without has some vocal critics casting the issue as a battle among classes or generations.

And like so many modern revolutionaries, Canada’s housing discontents are congregating on Reddit. On a subreddit called r/canadahousing, about 8,500 members share memes, post news articles and discuss what they refer to as Canada’s housing crisis.

The Redditors are also organizing. Using the proceeds from a GoFundMe campaign, they recently rented two billboards to be put up this week in Toronto and Ottawa. The Toronto one will say, “Can’t Afford a Home? Have You Tried Finding Richer Parents?” while the Ottawa one will read, “Homes Aren’t For You. They’re For the Rich. You Can Rent.”

“We’ll be the generation that can never retire because of housing prices. The barrier to entry has never been higher,” Greg Murray, a 33-year-old corporate strategy executive who was a spokesman for the Reddit group, said in an interview. (A few days after Bloomberg spoke to Murray, he stepped away from the group.)

In Canada as in the U.S., home ownership has long been seen as essential to securing a place in the middle class, prompting Canadians to own their homes at one of the highest rates in the world. The home ownership rate in Canada is roughly 69 per cent, compared with 65 per cent in France, 63 per cent in the U.K. and 61 per cent in Japan.

The Trudeau government has said it’s particularly focused on helping first-time homeowners get into the market, but so far most economists think the steps taken -- including a 1 per cent tax on non-resident homeowners and funding for affordable housing -- are unlikely to make up for the ground lost by prospective homebuyers in the last year. 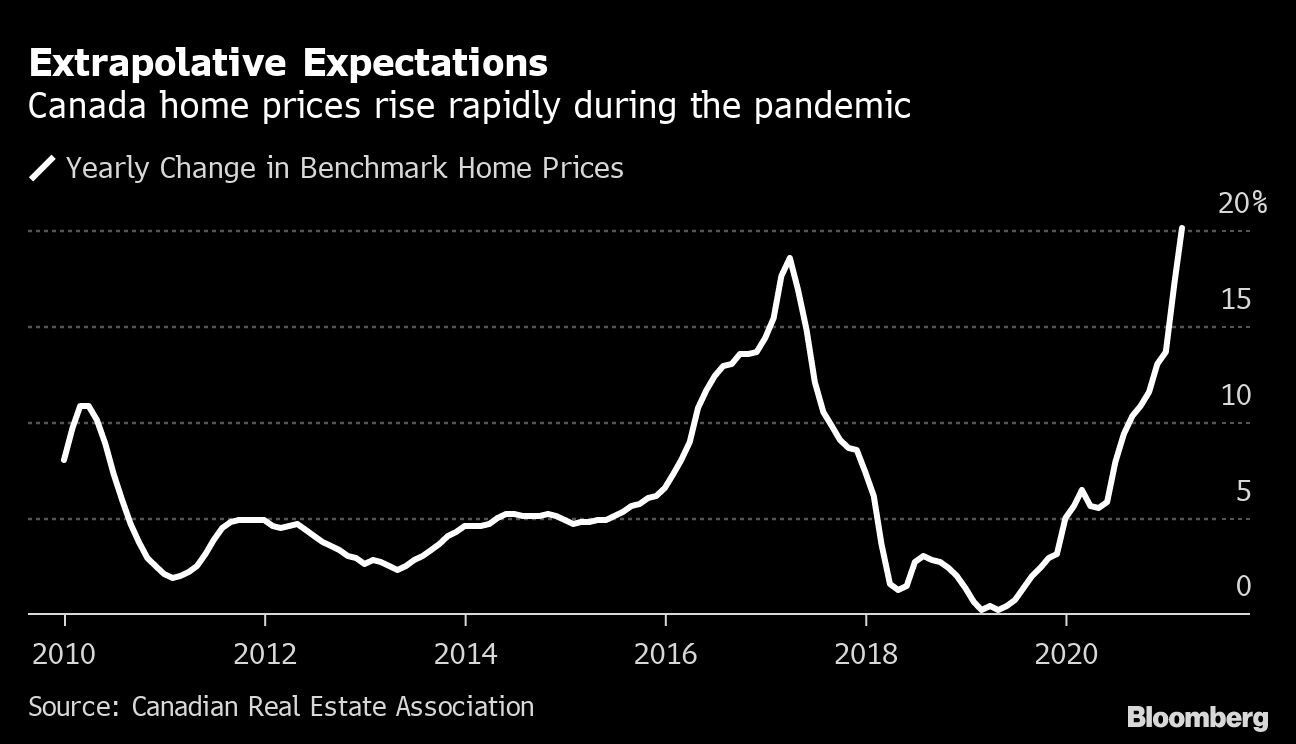 As a model for alternative policy, the Trudeau government’s critics point to New Zealand, which, faced with a similar housing boom over the past year that was induced by low interest rates, introduced a tax specifically targeting speculation. The government also instructed its central bank to consider housing when setting monetary policy.

Canada’s housing agitators often portray the issue as a conflict between the old and the young, and the propertied and the property-less. But the Bloomberg survey, conducted from April 29 to May 3, suggests that may not be the case. Even though 18 per cent of respondents 18 to 34 said they “support” increasing interest rates to slow the rise of housing prices, compared with 13 per cent of respondents over age 55, the older group was even more likely than the younger group to say they “somewhat support” an increase.

“I think it’s pretty clear to most people that housing in this country is all but out of control,” Benjamin Reitzes, a Canadian rates and macro strategist at BMO Capital Markets, said by email. “While it’s nice to have an appreciating asset, it makes moving to the next home that much more expensive. In addition, for those with kids, it makes you wonder how they’ll be able to afford a home if this continues.”