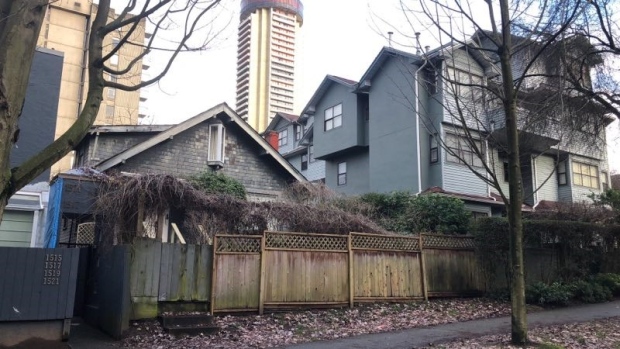 The house is located on 1511 Barclay Street in the west end of downtown Vancouver. , Image courtesy of Royal Pacific Realty Corp.

A 96-year old Vancouver home described as "just needing a little TLC" has been listed for sale for $6.98 million – almost 150 per cent more than what it sold for over two years ago.

The aging 2,372 square foot three-story home in the west-end of downtown Vancouver sold for $2.8 million near the end of 2015. It was reported to have received 11 offers then and sold in two weeks.

Now the same house is back on the market and the owners are asking for well over double that price.

Realtor Sydney Deng describes the four-bedroom home as a "beautiful old timer house" with a "well laid-out floorplan with beautiful, original inlaid floors," in the listing. But, there are no pictures of what the house looks like on the inside.

She goes on to say in the listing that the home was a "great opportunity for investment and self-use."

BNN contacted Deng for more details, but she had not responded by the time this article was published.

'VALUE NOT IN' HOUSE

Vancouver-based Remax Select realtor Keith Roy said the house has been on the market for over two months and "anybody can ask anything for a home" when it comes to pricing.

"It should be noted that the value is not in the house, it’s in the latent value of the land in combination with other parts of that block," Roy told BNN.

The home is situated on a relatively large 33-by-131 foot lot.

When asked if the house’s price was in line with what properties were sold for in the area, Roy said the house is a unique property and "recent sales were few and far between."

"This is a house in the middle of downtown that is surrounded by condos and apartments," he said.

Roy thinks the house will be sold to be part of a larger land assembly to build a high rise and increase density in the west end.

The listing comes after the government and regulators introduced a series of measures to cool Vancouver’s once red-hot property market in the last couple of years.

New data released by Sotheby’s on Wednesday showed that sales of single-family homes worth over $1 million in Vancouver fell nearly 40 per cent in the first two months of this year, while the sale of condos in the city worth over the same amount jumped above 50 per cent in the same period.