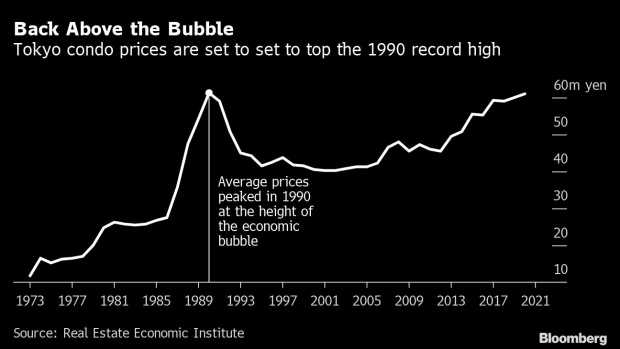 The Tokyo Tower, middle, and commercial and residential buildings are seen from the observatory in the Roppongi Hills Mori Tower, operated by Mori Building Co., in Tokyo, Japan, on Thursday, July 30, 2020. Officials in Japan are planning stricter measures on businesses and group activities as coronavirus cases continue to spread from a concentration around the capital to other urban areas across the country. Photographer: Shoko Takayasu/Bloomberg , Bloomberg

(Bloomberg) -- The price of new apartments in Tokyo in 2021 may have toppled a 30-year-old record as rising demand from dual-income households and increasing construction costs boost the Japanese capital’s once-moribund housing market.

Figures set to be released later Tuesday by the Real Estate Economic Institute are expected to confirm that the mean price of new condos in the Japanese capital and surrounding areas topped the 61.2 million yen ($537,000) high watermark set in 1990, at the peak of the economic bubble. Some market watchers expect the surge to continue this year.

“With a shortage of land and high construction costs, supply is not likely to jump anytime soon,” said Ryuta Hayakawa, a manager at Sumitomo Realty & Development Co. “Considering the demand, it’s unlikely that prices will fall.”

The 60.8 million yen average price for a new apartment in the greater Tokyo area in 2020 was the highest since 1990, before Japan entered its prolonged economic slump. Land prices at the time were so high that Tokyo’s Imperial Palace was reputed to be worth more than all the land in California. Apartment prices collapsed in the wake of the bubble bursting, losing more than a third in value in just five years, and remained largely flat for the next two decades.

But in the years since then-Prime Minister Shinzo Abe came to power in 2012, new apartment prices have surged. Abe’s fiscal stimulus, as well as the Bank of Japan’s unprecedented monetary easing, helped rekindle interest in the real estate market, with condo prices defying otherwise stagnant inflation to rise more than a third.

The recent increase has also been fueled by pre-pandemic demand from overseas buyers, particularly from China, as well as greater interest in better living quarters as professionals spend more time at home due to Covid and a recent dearth of supply.

Real estate is running hotter than other assets in Japan. The nation’s stock market has yet to reclaim its bubble-era highs, though benchmarks did touch 30-year records last year. More than 600 apartments at Harumi Flag, a real estate development that housed athletes and delegations during the Tokyo Olympic Games last year, sold out the day they went on sale. Responding to the demand, the government plans to trim tax breaks for homeowners from next year.

Despite Tokyo’s expensive reputation, the decades of stagnation combined with the relatively easy availability of 35-year mortgages at ultra-low interest rates, means city-center apartments remain within the reach of working professional couples, unlike those in many other large cities around the world.

The rise of high-earning, dual-income households as more women enter the workforce has also been cited among the reasons for rising property prices in urban regions. Co-working couples now make up more than two-thirds of all households, a 180-degree reversal of the trend during the bubble era.

Media have dubbed the phenomenon as “power couples,” with Naoko Kuga of NLI Research Institute defining them as those in which each partner earns more than 7 million yen. “While the overall number of ‘power couples’ is small, their willingness to spend is strong, and their impact on the consumer market cannot be ignored,” she wrote in a report this month.

Developers are also seeing extremely high interest for luxury apartments, according to Sumitomo Realty’s Hayakawa. Demand for these condos, which cost more than 200 million yen and have sizes of over 100 square meters (1,076 square feet), is rising not just in the Tokyo region, but also in cities such as Osaka and Sapporo in Hokkaido, he said.