The biggest wave of tenants in U.S. history has arrived, and landlords are responding with the largest-ever rent increases.

In the second quarter, the number of occupied units jumped by about half a million, the biggest annual increase in data going back to 1993, according to industry consultant RealPage Inc. Rents on newly signed leases soared 14.6 per centin June from a year earlier, the most on record, and occupancy reached 96.5%, matching the previous high in 2000. 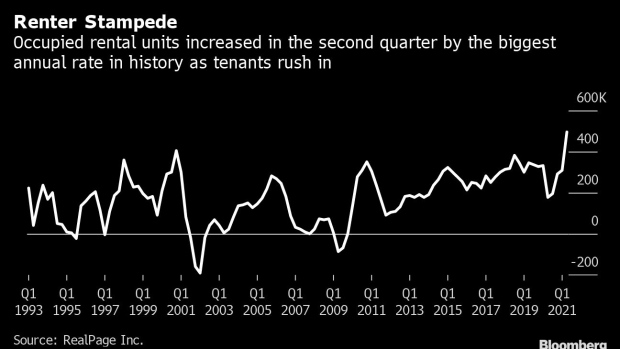 The rental market is getting flooded with Americans searching for apartments. The economy is revving up, and young people ready to leave their parents’ homes are competing with others who delayed moves because of COVID-19. At the same time, remote work is enabling families to relocate to more-affordable areas, and vaccines have made seniors comfortable again with downsizing.

“We’re seeing record low vacancy,” said Jay Parsons, deputy chief economist for RealPage. “Wages are up, people have the money. And people are saying take my money, I want to move in.”

The firm’s data on rents measure what new tenants pay compared with the previous occupant’s rate.

The end of the federal eviction moratorium last week may provide incentive for some landlords to throw tenants out. Demand is so strong that it won’t be hard to find someone else to move in, at a higher rent.