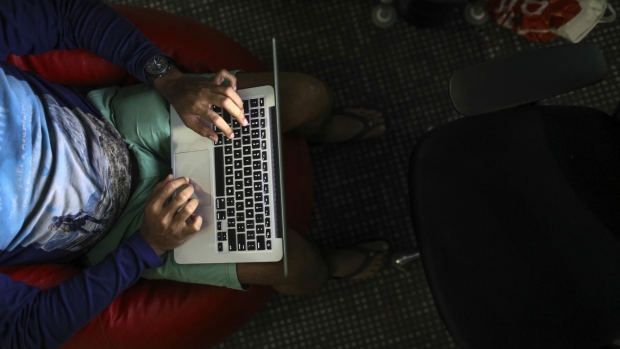 An employee is illuminated by the screen of an Apple Inc. laptop computer as he works at Flock's office in Mumbai, India, on Wednesday, June 28, 2017. Flock, a cloud-based team collaboration service that has attracted 25,000 enterprise users and customers, is pitched as a way to share ideas in real time while doing away with communication hierarchies, at a cheaper price than rival services. Photographer: Dhiraj Singh/Bloomberg , Bloomberg

The Cincinnati-based company sold 18.5 million shares for $23 each on Tuesday after offering them for $18 to $21, according to a statement. The IPO gives the company a market value of $3.9 billion based on the outstanding shares listed in its filing.

The listing is one of 27 seeking to raise more than $6.6 billion in one of the busiest weeks of the year on U.S. exchanges, according to data compiled by Bloomberg.

Paycor, which makes human capital management software for small and midsize businesses, said in its filings with the U.S. Securities and Exchange Commission that it has more than 28,000 customers across all 50 states in the U.S. The company said funds controlled by Apax Partners will own 82% of its common stock after the listing.

The offering is being led by Goldman Sachs Group Inc. and JPMorgan Chase & Co. Paycor’s shares are expected to begin trading Wednesday on the Nasdaq Global Select Market under the symbol PYCR.