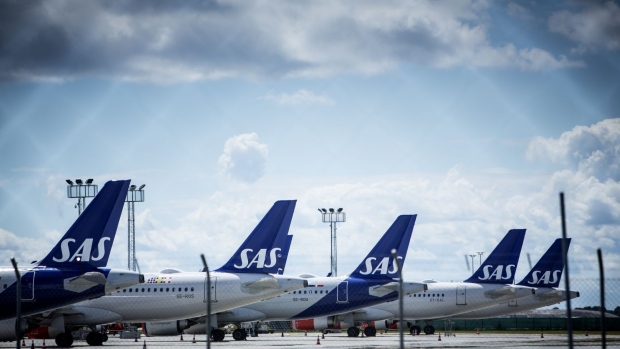 Passenger aircraft, operated by SAS AB, on the tarmac at Copenhagen Airport in Copenhagen, Denmark, on Tuesday, July 5, 2022. Scandinavian airline SAS AB filed for Chapter 11 to tackle its debt burden as the recovery from the disruption caused by the coronavirus pandemic has been slower than expected. Photographer: Carsten Snejbjerg/Bloomberg , Bloomberg

Apollo said it would provide roughly $700 million to help SAS continue to operate during bankruptcy on the condition that the court signed off on the breakup fee and a $1 million deposit to help cover the investment firm’s expenses in putting together the deal.

US Bankruptcy Judge Michael Wiles approved the fee on the basis that SAS, the company’s creditors committee and the US Trustee supported the terms, but questioned their necessity.

“I have never had a case where someone sought transaction protections in connection with a DIP loan,” Wiles said in a hearing Thursday.

A representative for the US Trustee said the federal bankruptcy watchdog didn’t file an objection to the fee because SAS said there was a risk of Apollo walking away from the deal, and there were no other contenders to provide SAS with the financing.

A hearing on the company’s debtor-in-possession financing package is set for Sept. 7.

SAS filed for bankruptcy in July, facing a crippling debt burden and dwindling cash balance amid the pandemic.