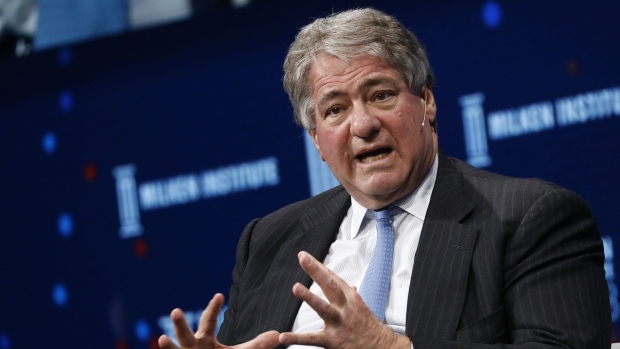 (Bloomberg) -- The backlash against Apollo Global Management Inc. over Leon Black’s ties with sex offender Jeffrey Epstein is waning, with investors lining up to entrust the firm to manage investments dedicated to social responsibility.

The New York-based firm expects to lock in more than $500 million in commitments as it aims to complete its initial phase of fundraising this month for Apollo Impact Mission, according to people familiar with the matter. Apollo aims to gather as much as $1.5 billion for the fund, the people said, which is the first of its kind for the firm.

The success of the fundraising, particularly for a socially responsible vehicle, is a sign that enough of Apollo’s investors have put the Epstein controversy behind them four months after Black stepped down as chief executive officer -- even as he remains in the spotlight over sexual-assault allegations. Some had put their commitments on hold as the firm pressed forward with an outside investigation, which found that while Apollo never did business with Epstein, Black paid him $158 million for tax and estate planning advice.

“We continue to have strong momentum in fundraising,” said Joanna Rose, an Apollo spokeswoman. Capital from third-party investors is “near the high end of the $15 billion to $20 billion annual range and we expect the second quarter to remain consistent.”

Apollo announced its new impact team in September and began reaching out to investors about the fund a month later as more revelations surfaced about Black’s ties to Epstein. As investors balked, Apollo temporarily halted marketing for the fund, and those efforts resumed in the spring, said one of the people, who declined to be identified discussing internal matters.

Black has remained in the news since resigning as Apollo’s CEO. Earlier this month, he vigorously denied allegations leveled by a former model from Russia named Guzel Ganieva that he assaulted her, instead admitting to an affair in a New York state court filing.

Apollo’s recent fundraising is part of an effort that’s two years in the making. It began planning to set up an impact investment arm in 2019, after firms including KKR & Co., TPG and Bain Capital jumped into the space.

Private equity firms are responding to increasing demand for socially-responsible investments from institutional investors like pensions and endowments, while also seeing it as another way to boost fee revenue. Last year, buyout firms raised almost $4 billion for impact funds, the most for the strategy since 2017, according to data provider Preqin.

In a confidential July presentation, Apollo touted its track record in social good investing by highlighting several investments from its flagship buyout funds, including rural hospital chain LifePoint Health, lender OneMain Holdings Inc. and Apollo Education Group Inc., which owns the University of Phoenix. All three are on track to be profitable for the firm. Bloomberg reported in May that Apollo was on its way to accumulating nearly $1 billion in dividends from its investment in the University of Phoenix’s parent company in part by selling off valuable international assets.

Apollo is targeting a 25% internal rate of return for its impact fund, according to the presentation. The firm is linking 18% of its cut of profits to financial performance and 2% to meeting social impact goals.

It will also charge investors a 1.5% management fee, on par with its current flagship buyout fund. To entice investors, the firm is offering fee discounts to those who join the initial close or commit at least $75 million to the fund.

Apollo Impact Mission will mark the first time that the nine-person investing team has worked together. The firm tapped Marc Becker, a veteran in the firm’s buyout business, and Joanna Reiss, who came from private equity firm Cornell Capital, to co-head the fund. Lisa Hall, who chairs the impact effort, joined from Georgetown University.

The fund has already struck one deal. Earlier this month, Apollo agreed to buy a majority stake in Reno De Medici, one of the largest producers of recycled cartonboard in Europe.